It’s been over 300 years since the infamous Edward Teach, better known as “Blackbeard”, passed away. He died on November 22, 1718 off the coast of North Carolina during the Battle of Ocracoke.

One of the most popular and well-known Outer Banks legends, Blackbeard's favorite anchorage was at Ocracoke Inlet which is just a ferry ride south of Hatteras Island.

Who Was Edward Teach?

Believed to have been born in Bristol, England, Edward Teach began his reign of terror when he captured a French merchant vessel and renamed the ship Queen Anne's Revenge.

He equipped the ship with about 40 guns and soon became a renowned pirate for his monstrous appearance with a thick, black beard and fears of what he might do.

It is said that Teach would tie lit fuses under his hat to frighten his enemies. He formed an alliance of pirates and with their help; he blockaded the port of Charleston, South Carolina.

After terrorizing the port for some time, Teach accidentally sunk his ship off the coast of North Carolina in what is considered the Graveyard of the Atlantic. He survived the crash and soon after, he was back in the Atlantic Ocean causing trouble.

Alexander Spotswood, who was Governor of Virginia at the time, arranged for a group of soldiers and sailors to capture Teach and put an end to his reign.

During an intense hand-to-hand battle, Teach and several members of his crew were killed by a small group of sailors on November 22, 1718 - over 300 years ago. His piratic adventures lasted only two years; however, his legend still lives on three centuries later.

The Legend of Edward Teach, a.k.a Blackbeard

A cove on Ocracoke Island known as Teach's Hole is the supposed site of Blackbeard's execution at sea. Legend says that when Blackbeard was finally caught and beheaded, his head was hung from a ship's bowsprit and his body was thrown overboard. Witnesses recall his head continuing to scream after the execution and his headless body swam around for a while.

You can read more about how Blackbeard haunts the coast of Northeastern North Carolina along with several other spooky places on the Outer Banks by checking out this page on our website! 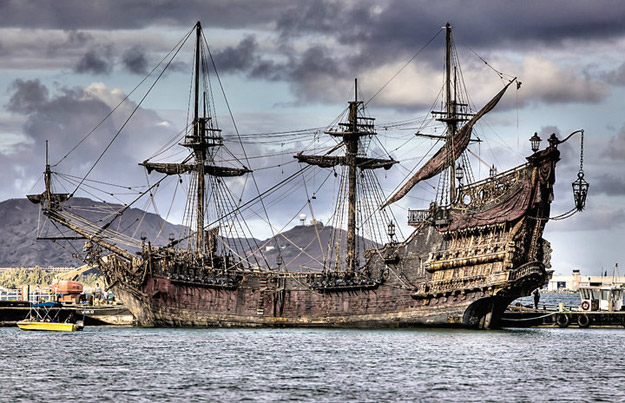 After 14 years of digging, archaeologists are certain they've discovered the famous Blackbeard flagship, the Queen Anne's Revenge, just off Ocracoke Island on the Outer Banks. After discovering Blackbeard's sword off the North Carolina Coast, researchers believe they have found more clues about what happened to Blackbeard, his crew, and his ship.

Archaeologists say there is no doubt that what they have been diving on since 1997 is the Queen Anne's Revenge, officially identified as shipwreck 31 CR 314.

"Absolutely" is what the QAR Project Director and Archaeologist Dr. Mark Wilde-Ramsing says. "There is no question that this could be any other ship."

But how it got there is still a mystery. Some believe the pirates may have ran the ship aground on purpose. The debris field encompasses an areaapproximately 90 x 200 feet with a north-south orientation. Finding bits and pieces of the wreckage, coins, navigational instruments, pewter ware, intactbottles, lead shots of many sizes, small arms and gold dust, to name a few, there is still something missing…bodies.

With over half of the artifacts discovered, divers set a goal to find the rest by 2013. Weather conditions determine the dive schedule. It can be calmunderwater, yet storms can cause limited visibility. Future dives will undoubtedly answer many questions surrounding Blackbeard and his ships, and confirmthe Outer Banks truly is the Graveyard of the Atlantic.