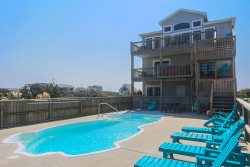 Beginning Friday, April 20 - the Bodie Island and Cape Hatteras lighthouses will both open for the 2018 season. Tickets to climb the lighthouses can be purchased on-site between 9 a.m. and 4:30 p.m. daily. Information regarding ticket prices and safety and rules can be found here.

Full Moon Tours of the Cape Hatteras Lighthouse will be offered on May 29, June 28, July 27, Aug. 26, and Sept. 24. Tickets for the full moon climbs may be purchased here starting at 10 a.m., three days prior to each tourdate.

The name Bodie was originally spelled Body and is still pronounced "body" (as in "a body of water"). There are several stories, which attempt to explain the spelling and pronunciation. Some say it was because so many bodies washed ashore from shipwrecks. Some claim it was because an island is a body of land. Others believe it was the name of someone who helped build the light or was stationed there.

The crown jewel of Hatteras Island is the Cape Hatteras Lighthouse-the tallest lighthouse in the United States. The 208-foot-tall structure is characterized by a black-and-white spiral pattern and emits a beam of light that can be seen for 20 miles.