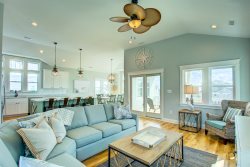 This past summer's hottest Outer Banks vacation attraction is no more.  It has been reported that Shelly Island of the Outer Banks is gone. Not because the Island has disappeared back underneath the sea from whence it came, but because the island appears to have connected to Cape Hatteras in more than one area and is now basically part of Cape Hatteras.

What is unclear is if this joining of Shelly Island and Cape Hatteras is just during low tide, or not.  When I went to the island in August the mile long island was starting to connect to the Cape.  People were walking over during low tide, only to have a frightening experience as they tried to cross back during high tide.

Either way, since the island has slowly been connecting to the Cape for months now, I assume that it will only become more joined to Cape Hatteras over time, no matter the tide. As for now, Shelly Island appears to be no more, since it is technically no longer a stand-alone island. That being said, you can still book an awesome vacation rental on the Outer Banks from us and visit the shiny, shelly, newest part of Cape Hatteras (formerly Shelly Island), and have a ball!

Of course, as with all things Shelly Island… this could always change.

One final note, it seems that the adjoining of Shelly Island to Cape Hatteras would kill any claim that Virginia Business man Ken Barlow is claiming to have on the island, right?

Watch video from Wavy 10 news that show how Shelly Island is connecting to Cape Hatteras.