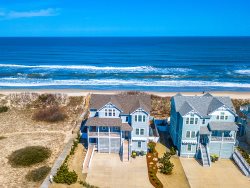 At a height of 158 feet, theCurrituck Beach Lighthouselocated in Corolla, NC is by far the tallest structure on the Northern Outer Banks beaches. The beacon from the unpainted brick lighthouse first filled thesky on December 1, 1875 and the iconic structure is one of the coastal town's most popular attractions.

Before the lighthouse beacon was automated in 1939 by the United States Coast Guard, two families that attended to the day to day maintenance and operationof the grounds shared the quarters of the Lighthouse Keepers' House located on site. By the late 1970s when no one had occupied the home for over 30 yearsfollowing the automation of the lighthouse, the Keepers' House had become nothing more than a dilapidated eye sore. Thanks to several decades of neglectand a few major tropical storms, the structure had no doors or windows and seemed to be in disrepair.

The photo of the Keepers' House depicted above was taken in 1980 and shortly after, the Outer Banks Conservationist Inc., which is a private non-profitorganization dedicated to the conversations of the charter of the Outer Banks, signed a lease with the State of North Carolina to begin a restorationproject on the lighthouse grounds. This agreement left the non-profit company with the daunting task of restoring the decaying Keepers' House to it'sprevious state.

Today, the restoration of the Keepers' House is complete and the lighthouse grounds and walkways are in tip top shape. The Currituck Beach Lighthouse isopen to the public daily from 9:00 a.m. to 5:00 p.m. from early spring to late fall. It costs $8 to climb to the top and children 7 years or younger climbfor free.

Thanks for checking out this weeksThrowback Thursday photo and be sure to comeback next week for another retro image from the Outer Banks.