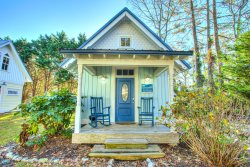 The Red Wolf Recovery Program and the Alligator River National Wildlife Refuge offer visitors and locals of northeastern North Carolina an opportunity to learn more about the endangered red wolves in the only place in the world where they still exist in the wild!

By 1980, the once common red wolf was essentially extinct in the wild due to habitat destruction and systematic extermination by humans. The remainingpopulation along the Gulf Coast of eastern Texas and western Louisiana began a captive breeding program.

An estimated 60 percent of the restoration area is privately owned land and according to the the Red Wolf Coalition's website, there were approximately 130 wild red wolves roaming the 1.7 million acres in 2010.

Since the red wolfs are protected by the federal government's  Endangered Species Act of 1973, purposely killing one ofthe few existing wolfs is a federal offense. The main threat to the wild population in North Carolina is cars, hunters and habitat loss due to humandevelopment.

From 5:00 pm till 6:30 pm on Saturday, December 7, there will be a red wolf howling at the Alligator River National Wildlife Refuge in northeastern North Carolina. If you've never visited the refuge before, it's on a 20 minute drive from Roanoke Island on U.S. 64.

To take part in the "Holiday Howl", visitors should meet at the Creef Cut Wildlife Trail parking lot no later than 5:00 pm. Participants will be led back to an area near a population of captive red wolfs on the refuge.

The captive red wolfs will be the ones howling, however it's possible for nearby wild wolfs to also join in. You will NOT be able to seethe captive animals, their location on the refuge is kept private.

It's suggested that you bring along a flashlight, insect repellent and be sure to dress for the weather; the howling will occur unless there is lightning, heavy rain or wind, or impassable roads. Please don't bring along any pets to the event.

If you're interested in seeing wild black bears (who isn't), you should plan to arrive 1 - 2 hours before the event and drive around gravel roads inside Alligator River Refuge. There is a sizable wild black bear population that can easily be spotted roaming in the fields, swimming in the streams, or wondering across the road.

Some volunteers at theU.S. Fish & Wildlife Visitors Center in Manteo havespotted 20+ different black bears during just an hour of driving. The best time to spot them is early early morning or right before dark - making 4:00 pmthe perfect time of day. You can also see a wide-array of birds including plenty of water fowl and raptors.

This is a completely free event thanks to the non-profit Red Wolf Coalition and the U.S. Fish and Wildlife Service's Red Wolf Recovery Program. Registration is not required, however you can call 252.216.9464 if you have any questions about this event.