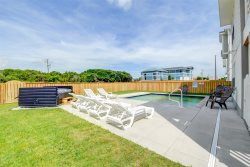 Any fellow DMB fans out there? Well if you didn't know already, Tim Reynolds, the lead guitarist of Dave Matthews Band actually lives in Kill Devil Hills. Even cooler...Adam shared a duplex with him when he first moved to the Outer Banks. Reynolds recently sat down with Glide Magazine for an exclusive interview about his history with Dave Matthews Band and his solo career as founding member of TR3 (Tim Reynolds Trio). TR3 actually plays sometimes here locally and one of our very own Coldwell Banker Seaside Realty agents, Dave Martier, is the bands drummer.

He shared some pretty neat stories about being on the road with the band, how being part of such a successful modern rock band has affected him as a musician and what inspires him. Check out the article here to learn more about Tim and what makes him such a unique artist. Let us know what you think. Maybe if you are in the OBX you will see him around :)