Easily recognized by its unique diagonal black and white stripes, the Cape Hatteras Lighthouse is known for being the tallest brick lighthouse in North America at a height of 208 feet. The automated lighthouse is powered by electricity with a rotating light beacon that flashes white every 7.5 seconds and can be seen at a range of up to 24 nautical miles away. In 1999, an incredible achievement occurred when the approximately 4,300-ton Cape Hatteras Lighthouse was moved a distance of 2,900 feet using a system of steel track beams and hydraulic jacks. The entire project took 23-days and cost around $11.8 million dollars. By 2000, the lighthouse was re-opened to the public for climbing and most recently, received a fresh coat of paint in 2014. A visitor center and two historic lightkeeper’s quarters, which were also moved, are all on site. If you venture up the 257 steps to the top of the balcony, you will be rewarded with incredible 360-degree views of Hatteras Island, the Pamlico Sound and the Atlantic Ocean. 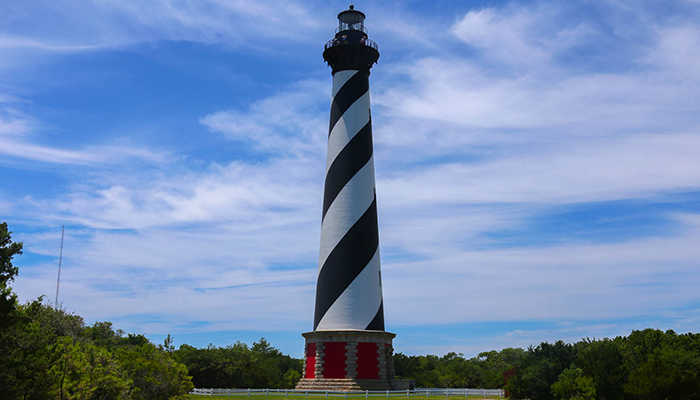 As the shoals off the coast of Cape Hatteras were becoming infamously recognized for their extremely dangerous conditions, Congress authorized the construction of a lighthouse in 1794. Construction began in 1799 and in 1803, the very first lighthouse at Cape Hatteras was operational. The structure itself was 90-feet tall, lit by whale oil, made of sandstone and kept its natural sand color. 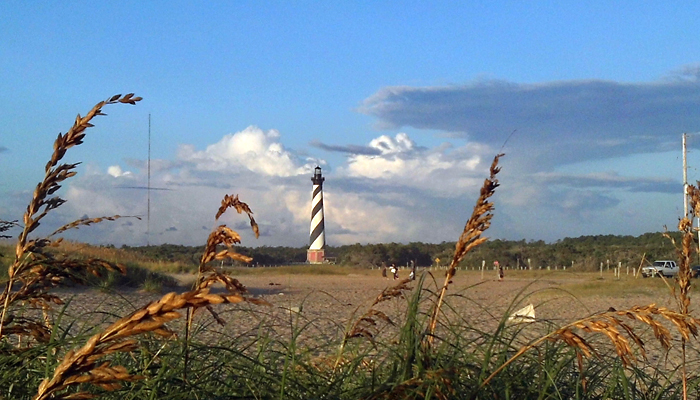 To improve visibility, the Lighthouse Board later added 60-feet to the structure, installed a first-order Fresnel lens and painted it red on top and white on the bottom. Unfortunately, the deteriorating structure was in a constant state of needing repairs which resulted in Congress appropriating funds to construct a brand-new lighthouse. The second lighthouse was first operational on December 1, 1870 and the original sandstone structure was demolished the next year. In 1873, the new structure was painted with the diagonal black and white stripes that still exist today. A Fresnel lens was installed that needed be manually rewound each day until it was eventually electrified in 1934. It would be just one year later in 1935 that the lighthouse would be decommissioned by the Bureau of Lighthouses due to the encroaching tides caused by erosion. Since there was still need for a light, a skeletal steel tower (The Buxton Woods tower) was used as a placeholder lighthouse until 1950 and during this time, the grounds were taken over by the National Park Service and served as an observation tower during World War II. By 1950, beach stabilization allowed the beacon to be returned to the Cape Hatteras Lighthouse. Unfortunately, despite initial stabilization, erosion continued to threaten the structure. By 1980, the lighthouse, which was originally built about 1,500-feet from the shoreline, was only 50-70 feet from the shoreline. To save this historic landmark, it was decided that the entire lighthouse would be relocated in 1999. At its new location, the lighthouse once again sits at approximately 1,500-feet from the shoreline and is positioned on a steel-reinforced foundation made of concrete slab, brick and rock. Stone markers are still situated at the site of the original location allowing visitors to get a good look at how close the lighthouse was to the ocean. 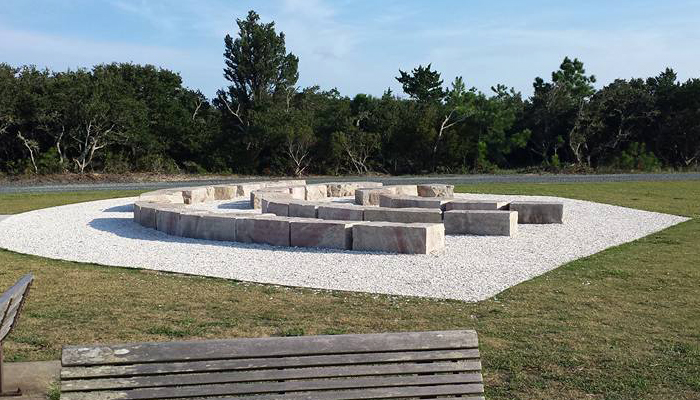 The Cape Hatteras Light Station will be open for climbing for the 2019 season from Friday, April 19th through Monday, October 14th. On the opening day, lighthouse climbs are free of charge but the normal admission is $8.00 for adults. Tickets are only $4.00 for seniors over 62, children under 11 and those with disabilities. Tickets can be purchased on-site and climbs run every 10 minutes beginning at 9:00 AM with the last tour departing at 4:30 PM. Be sure to review the NPS website for weight and height restrictions and other safety rules. This year, eight (8) nighttime “Full Moon Tours” will be held June 17th and July 16th at 8:30 PM and 9:30 PM, August 15th at 8:00 PM and 9:00 PM, and September 14th at 7:30 PM and 8:30 PM.

Did you know? This year marks the 20th anniversary of the famous 2,900-foot lighthouse move in 1999. In commemoration, a 20-minute informational program will be hosted daily from May 3rd to October 14th at the Visitor Center Pavilion. Plans for a special anniversary event are underway.