The Currituck Beach Lighthouse is a 162-foot tall brick lighthouse in Corolla, NC. Boasting a first-order Fresnel lens that can be seen up to 18 nautical miles away, Currituck Beach Lighthouse flashes at a 20-second interval cycle with the light being on for 3 seconds and off for 17 seconds. Recognized by its natural-brick color, this lighthouse stands 158-feet above sea level and is the northern most lighthouse in North Carolina with the next coastal lighthouse located 34 miles north in Fort Story, Virginia. With awesome 360-degree views of the surrounding Currituck Sound and Atlantic Ocean beaches, adventurous visitors can climb the 220 steps to the top. 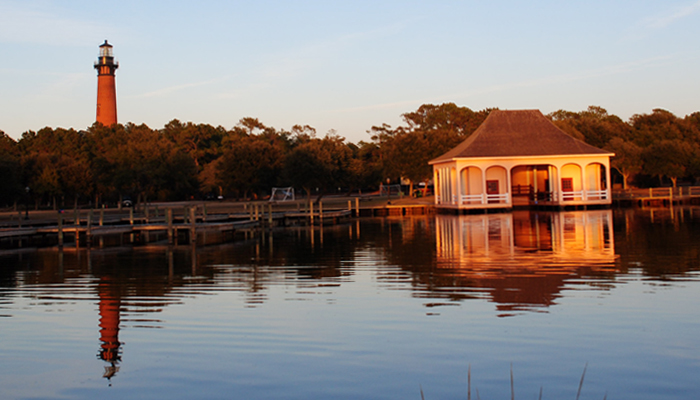 The Currituck Beach Lighthouse opened on December 1, 1875. The need for a lighthouse in Corolla was noticed when, although the Bodie Island Lighthouse and the Cape Henry Lighthouse (in Virginia) had already been in operation, ships continued to be lost at sea in the dangerous shoals between the reach of the other two lights. Burning lard oil was the original light source until 1884 when mineral oil was used. It wasn’t until 1933 that an electric source was used but this required a manual rotation system to be cranked by a lightkeeper every few hours. The Currituck Beach Lighthouse was finally automated in 1937 and operation was absorbed by the US Coast Guard two years later. In 1990, the lighthouse was in need of a restoration so the non-profit group Outer Banks Conservationists Inc. (OBC) took over maintenance of the premise through a 30-year lease with the US Coast Guard in order to make repairs and open the lighthouse to the public. In 2003, the deed for the lighthouse was officially handed over to the OBC (utilizing the 2000 National Historic Lighthouse Preservation Act) who still maintains the site today exclusively through private funding. 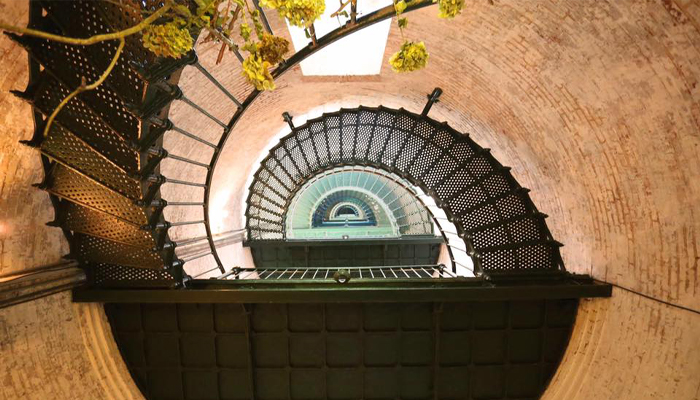 The Currituck Beach Lighthouse is open March 16th – December 1st for the 2019 season (grounds open until 8:00 PM Wednesdays and Thursdays Memorial Day – Labor Day weather permitting). Visiting is free of charge but to climb to the top, a $10 admission will be charged (children 7 & under climb free with adults). A liability wavier must be read and signed by each climber. A museum shop is also on site so guests can purchase a memento to take home to remember their visit. Later this year, 12/1/2019 will mark the 144th birthday of the Currituck Beach Lighthouse! To celebrate, guests can climb the lighthouse for free (and it’s the last day open for the season!) 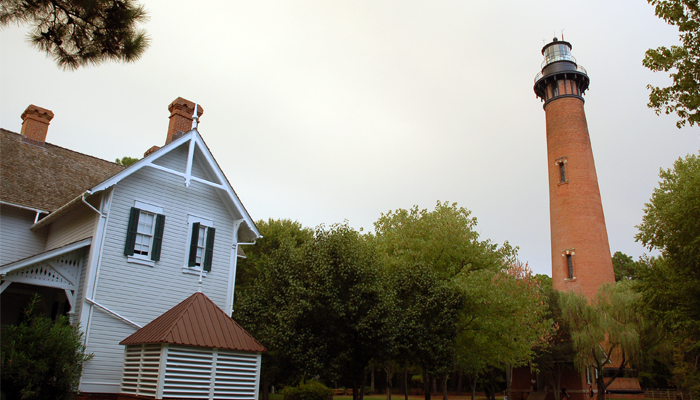 Did you know? The Currituck Beach Lighthouse was made built with approximately one million bricks!