The Ocracoke Station Light is a 75-foot tall brick lighthouse that sits on the western side of the island near the Ocracoke Inlet. There are 86 steps to the top of the lighthouse which emits a stationary beam of light visible up to 14 nautical miles away and is now completely automated. In order to access the lighthouse, visitors and residents who are not already in Ocracoke Village will need to take the ferry from Hatteras Inlet to Ocracoke Island and drive into the village. 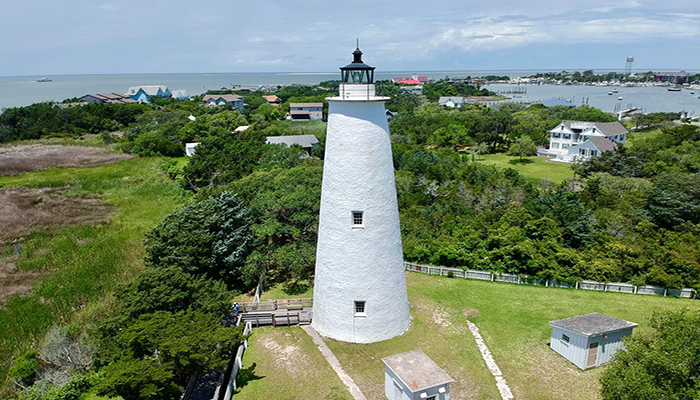 By the 1700s, Ocracoke Inlet was an extremely busy inlet due to being the best route to reach popular inland ports such as New Bern and Elizabeth City. With the need for navigational aid through the inlet, a lighthouse was built in 1794 on Shell Castle Island which was located near a channel between Ocracoke Island and Portsmouth Island. Over the years due to the shifting channel, the once-appreciated wooden light tower was no longer efficient and was unfortunately destroyed by lightning in 1818. A new lighthouse, and the same structure that stands today, was built on Ocracoke Island beginning in 1822 and became fully operational by 1823. Originally an oil-burning lighthouse with reflector systems, it was replaced with a fourth-order Fresnel lens in 1854. Although the lens was temporarily dismantled by Confederate troops during the Civil War, it was re-installed by 1864. By 1955, the light was automated. The lighthouse is currently maintained by the US Coast Guard and the land itself is part of the National Park Service. 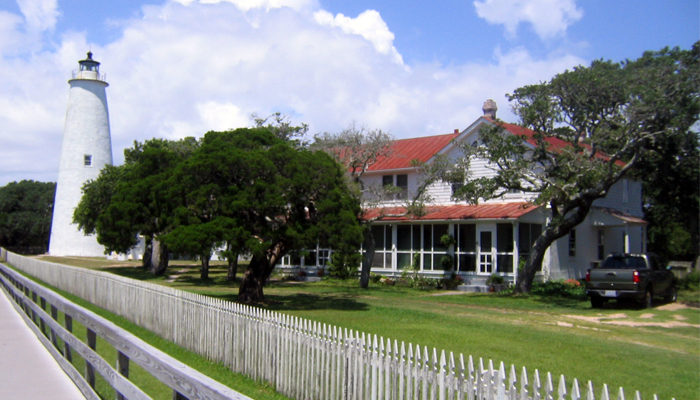 Visitors on Ocracoke Island can visit the Ocracoke Lighthouse site year-round. However, due to its age and potentially dangerous structural integrity, the lighthouse tower is not open for climbing. There is no museum or visitor center on site but the original lightkeeper’s house sits nearby.

Did you know? The Ocracoke Island Lighthouse is one of the oldest operating lighthouses in the United States and is the oldest lighthouse in North Carolina that is still in operation.