Although the Roanoke Marshes Light isn’t a towering brick structure like the other lighthouses on the Outer Banks, its unique design that resembles a coastal lightkeepers house is exactly what makes it stand out. The lighthouse is actually stationed on a 40-yard long boardwalk that sticks out in the middle of the water off of downtown Manteo. The 37-foot tall lighthouse is actually a replica of an original lighthouse (that once stood in Wanchese) dedicated in 2004 by the town of Manteo and is managed by the NC Maritime Museum. While serving as a local historic landmark, the operational lighthouse helps boats entering and leaving the Shallowbag Bay area using a fourth-order Fresnel Lens, on loan from the US Coast Guard, that emits a fixed white light. 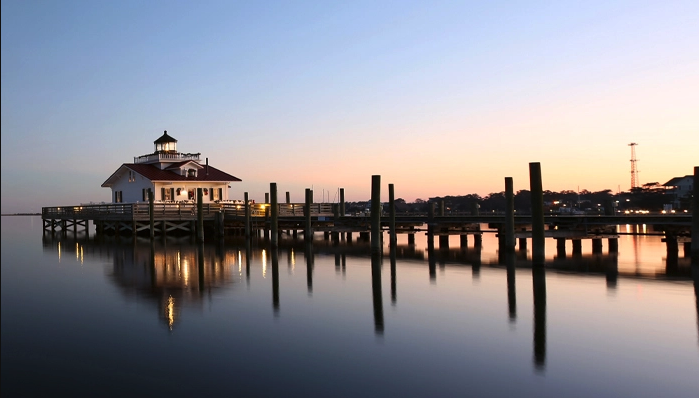 The lighthouse was unfortunately purchased by a private buyer where, in an attempt to move it by barge to Edenton, it fell into the Albemarle Sound and was completely lost. After years of planning, local residents and the town of Manteo were eventually successful in the construction of a replica of the 1877 lighthouse. Moved to the Manteo waterfront area in order to coincide with the push for educating visitors on Manteo’s maritime culture, the new Roanoke Marshes Lighthouse was opened in 2004.

Visitors are welcome to visit the Roanoke Marshes Lighthouse site and walk along the boardwalk any time of the year. The building, however, is only open during the “in-season” and hosts an exhibit about the lighthouse’s history. Admission is free to walk inside but the light tower is not open for climbing. The awesome sound front location and close proximity to nearby Roanoke Island Maritime Museum make it a popular destination for visitors who want to learn more about Outer Banks history.

Did you know? Visitors can check out an original screw-pile leg on display that was discovered in the sound by the US Army Corps of Engineers and is believed to have been part of the original 1877 lighthouse making the unique cylindrical artifact well over a century old.