The Most Popular Ice Cream Truck Treat in Every State 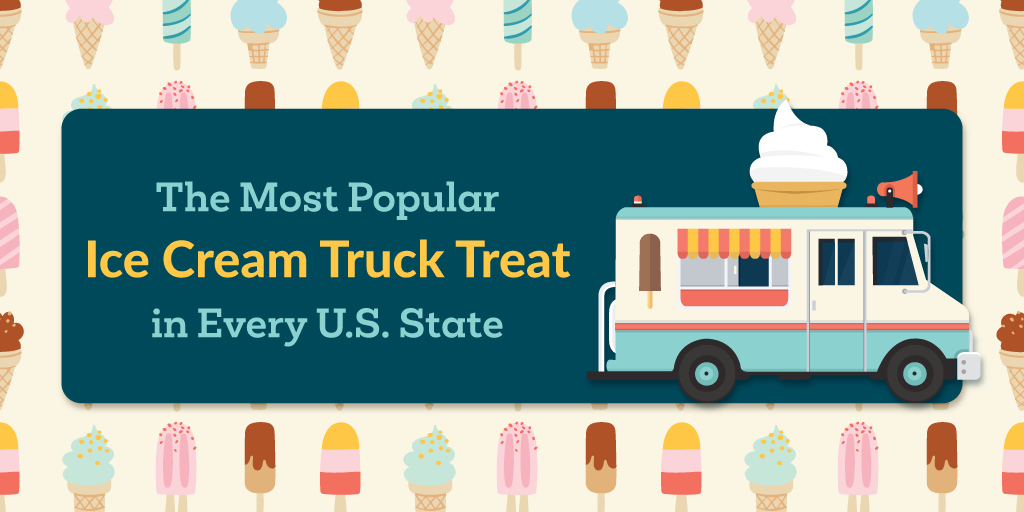 Ah, summertime, when school is out and pools are open. On any warm summer evening, shouts of “cannonball!” and the hum of cicadas may be interrupted by the distant jingle of an approaching ice cream truck. Soon, families are lined up at the truck window, quarters clinking in their pockets and hopeful faces turned up to the refrigerated air, hands outstretched for the cold confections.

And there’s a treat for everyone. Some prefer to crack the chilled chocolate shell of a Klondike Bar, while others favor the tartness of Lemon Ice. Toddlers may flock for the novelty of a Spongebob Ice Cream Pop, their fragile baby teeth loosening against the frozen gumball eyes; parents, nostalgic for their own childhoods, may remember the sweetness of those early summers in the age-old favorite, the Push-up Pop.

When it comes to dessert, one thing is clear—I scream, you scream, we all scream for ice cream. But which treats are the most popular, and where?

To find out, we explored online search interest in frozen favorites. Using a list of 24 popular ice cream truck treats, we explored Google search trends over the last 12 months for all 50 states plus the District of Columbia. We determined clear winners for the most popular treat in each state and overall, and how many states searched that treat the most. Read on to see which one is the (ice) cream of the crop in your state!

The Most Popular Ice Cream Truck Treat in Every State 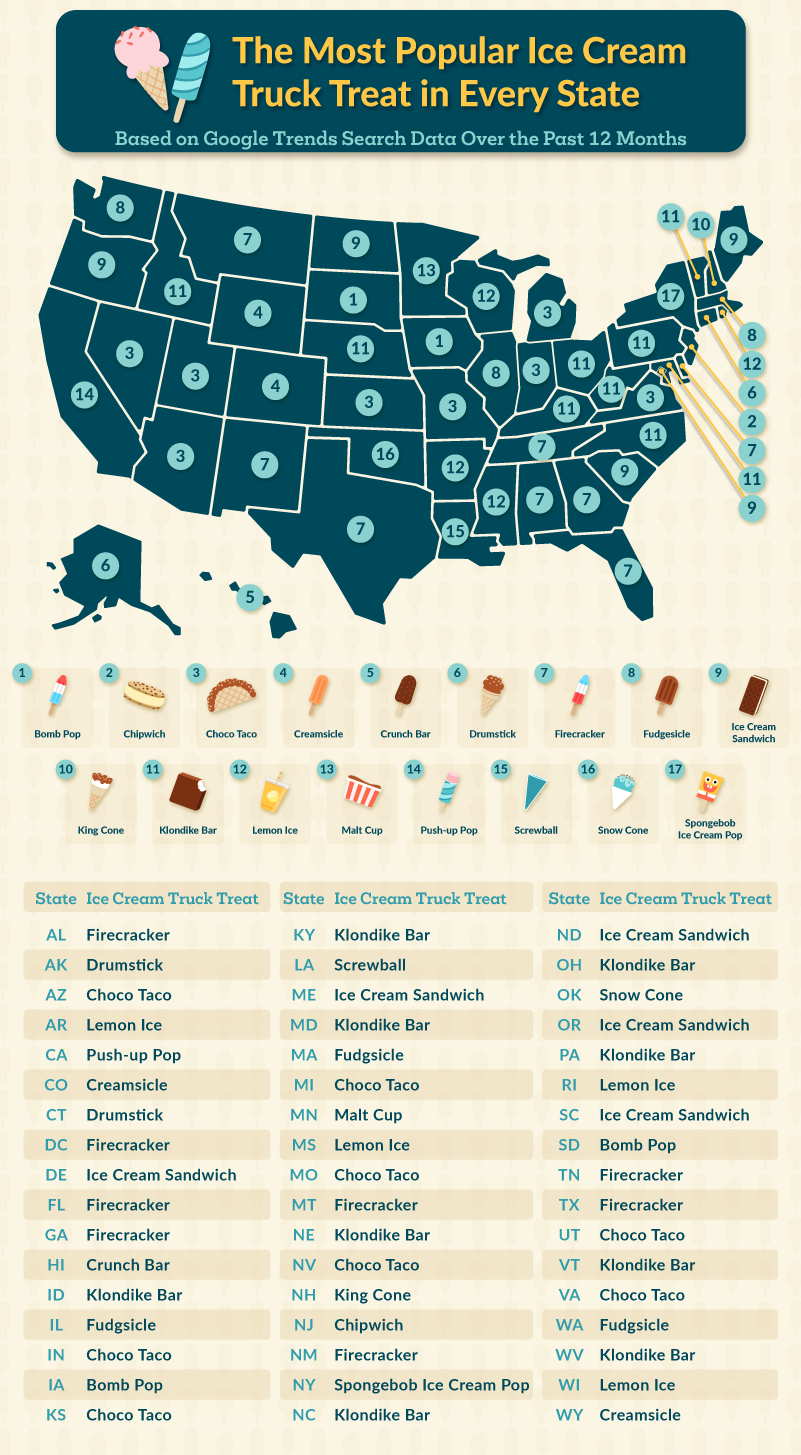 Americans across the country melted for 17 out of the 24 ice cream truck treats included in this study. Search interest for the Bomb Pop exploded in Iowa and South Dakota, while dessert fans in Colorado and Wyoming stood in line for their number one pick, the Creamsicle. Oklahomans’ winning treat, the Snow Cone, gave the Sooner State the next best thing to a summertime snowfall. The King Cone reigned supreme in New Hampshire, and support for the Screwball in Louisiana was no laughing matter. Hawaiians enjoyed the Crunch Bar on island time, Minnesotans brought the soda shop home with the Malt Cup, and New Jersey eaters treated themselves to a cookie a la mode with the Chipwich.

Not everything on the ice cream truck menu made it into this study’s rankings. Two treats—the Snoopy Bar and the Pink Panther Bar—had no search interest at all. Americans ignored the simplicity of the original Ice Cream on a Stick in favor of multi-flavored popsicles like the Firecracker and the Bomb Pop. Character bars, beloved cartoon faces like Tweety and Sonic the Hedgehog in ice cream form, were largely out of the running despite their appeal to younger eaters. And no one went nuts for the Toasted Almond Bar. 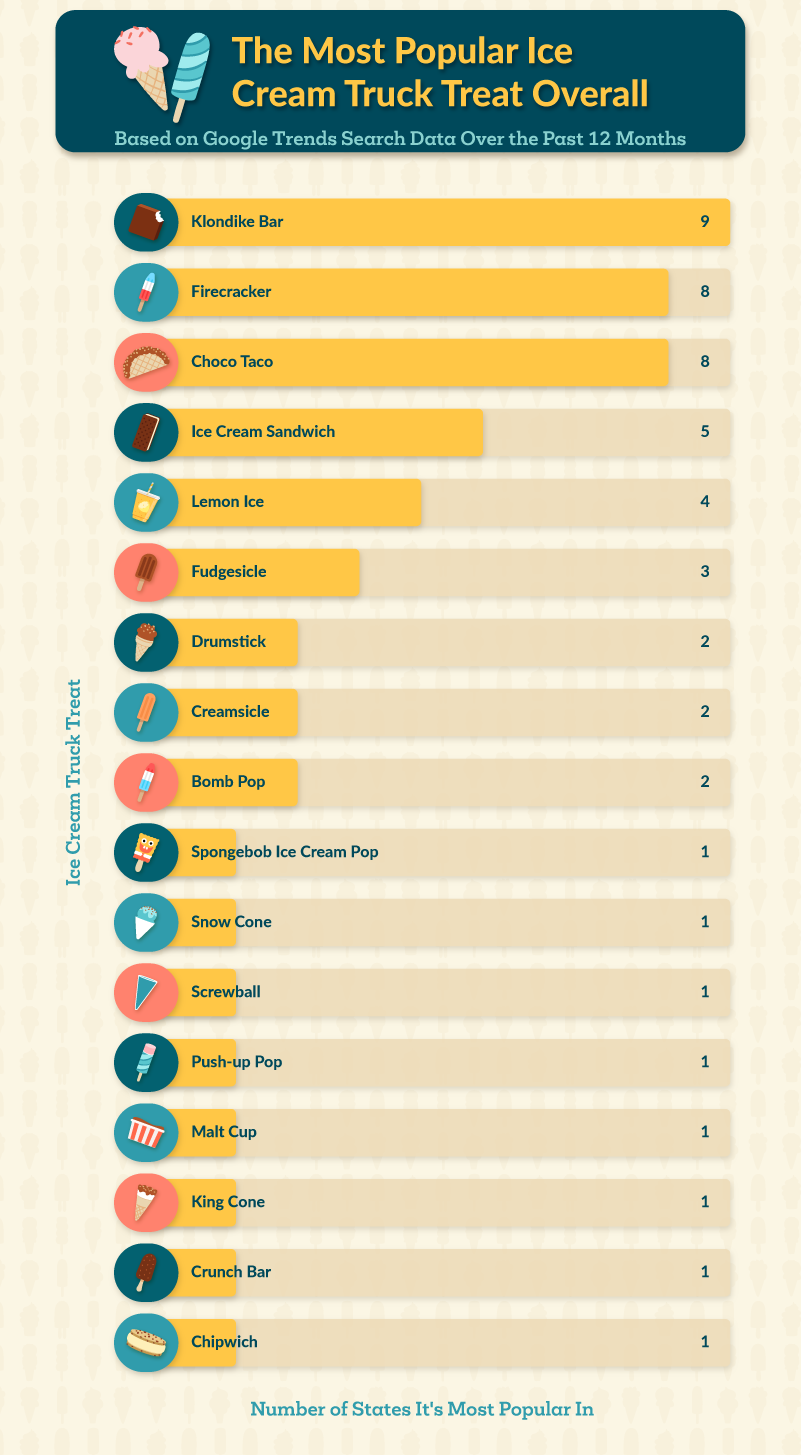 So, which treat was the one and cone-ly winner? When it came to the most popular ice cream truck treat overall, the Klondike Bar was America’s favorite—but barely.

While the iconic square treat ranked first in nine states, including Idaho, Kentucky, and Maryland, the Firecracker and the Choco Taco followed closely with eight states each. Texans and Tennesseeans showed their support for the red, white, and blue—red cherry, white lemon, and blue raspberry, that is—with their number one pick, the Firecracker.

In states like Nevada, Missouri, and Virginia, Taco Tuesday got a little bit sweeter with their favorite treat, the Choco Taco. Ice cream sandwiches, easy to eat and easy to love, ranked first in five states, North Dakota, Oregon, and Washington, D.C. And the Drumstick, a portable sundae with a dessert-filled cone, had folks in Alaska and Connecticut running for their ice cream cash.

If you’re looking to treat yourself this summer, enjoy your ice cream on the beach or poolside when you visit North Carolina’s Outer Banks, the number one destination for family beach vacations in the U.S. according to U.S. News and World Report. Whether you’re traveling alone or with family and friends, find the summer vacation rental that fits your needs with Seaside Vacations. While you’re relaxing, remember to be on the lookout for some of the locally owned and operated ice cream trucks when it’s time to chill out and chow down!