When you think about the Outer Banks, most visitors dream of lazy days spent by the ocean with their shades on and SPF30 in hand. However, there are many different attractions on the Outer Banks that you should check out while you’re here—one of which being the OBX Maritime Forests. Maritime forests grow along barrier islands, like the Outer Banks, and are constantly changing estuaries that protect the shoreline while becoming a natural habitat to a variety of animal and plant species. From beautiful canals bustling with wildlife to relaxing trails that wind through natural marshland, exploring the local maritime forests give visitors an up-close and personal look at the area’s diverse environment. Here are a few maritime forests on the Outer Banks you can check out:

Stretching across 965 acres, the Currituck Banks Reserve is located in Northern Corolla and is originally part of the Currituck Banks dedicated by NOAA and the Division of Coastal Management in the mid-80s. Combined with land donated by local landowners during a tourism and construction boom, the reserve is bordered by the Currituck Sound and the Atlantic Ocean and is one of 10 sites making up the NC Coastal Reserve & National Estaurine Research Reserve. The Reserve, which is a mixture of beach, forest, grasslands, marsh land, tidal flats and sound waters, is a unique low-salinity ecosystem home to native animals, vegetation and marine life.

Over time, the landscape of the reserve has been altered due to shifting shoals and other geographical changes. In fact, there once were many inlets located around the northern Outer Banks connecting the Currituck Sound to the Atlantic. These inlets were ever-changing due to hurricanes and nor’easters, and the last inlet closed in 1828 effectively placing the Reserve over 60 miles away from the nearest inlet. Since then, the Currituck Sound has shifted into more of a freshwater environment due to the lack of salt deposits.

To get a first-hand look yourself, you can explore the Reserve by driving through the Carova Beach area with a 4WD vehicle, take a kayak out in the sound, or take a hike on the two walking trails. The 4x4 area is where the Corolla Wild Horses roam—a species of wild mustangs descended from horses brought over by Spanish explorers in the 16th century—and a destination you don’t want to miss on your next vacation! As far as walking trails, the “Boardwalk/Sound Overlook” trail is 2/3 mile round trip taking you to the Currituck Sound while the “Maritime Forest” trail is 1.5-miles round trip and winds through maritime forest before ending at the Sound. Trail maps can be found here. The reserve is open year-round.

There are a host of animals, birds and fish you may see while visiting the reserve. Mammals native to the area include white-tailed deer, opossums, gray squirrels, raccoons, gray foxes, and bobcats while river otter, muskrats, and nutria may be found visiting the marshes. Because the Reserve supports diverse habitats, many birds can be found including gulls, terns, pelicans, plovers, hawks, bald eagles, herons, and egrets just to name a few—it’s a birdwatcher’s paradise! Lastly, the sound waters host numerous saltwater and freshwater species such as speckled trout, largemouth bass, perch, red drum, blue crab, and sea turtles. Various amphibians, reptiles, and insects can also be found in the area and visitors should always use caution on the trails and in the water. Vegetation species that are found throughout the Reserve include oaks, loblolly pine, red maple, American holly, wax myrtle, and sea oat. Learn more about the Currituck Banks Reserve. 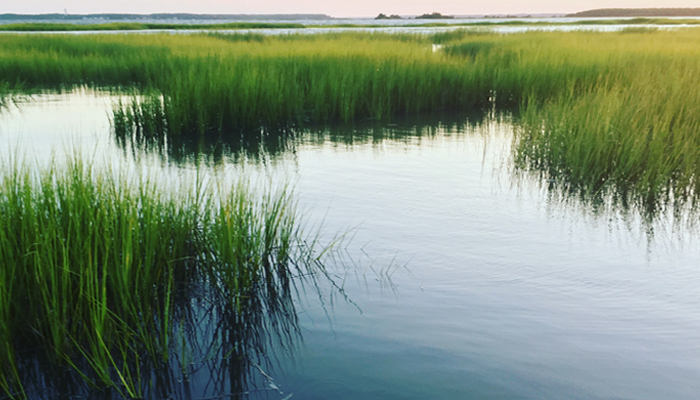 Kitty Hawk Woods is a local maritime forest located in Kitty Hawk, North Carolina. As part of the NC Coastal Reserve, Kitty Hawk Woods borders the Currituck Sound and Kitty Hawk Bay and covers 1,890 acres of deciduous forest, interdune ponds and freshwater wetlands. Approximately 461 of the acres are owned by the town of Kitty Hawk and is authorized as a Dedicated Nature Preserve.

Kitty Hawk Woods has shifting elevations with both low spots (swales) and higher spots (ridges) that allow for a variety of plant species ranging from wetland plants to the American Beech tree. Additionally, the geography of the area features ancient sand dunes and shorelines showing evidence of shifting shoals. Like the Currituck Banks Reserve, there is low salinity in the sound waters due to the distance to the next closest inlet and salinity level can fluctuate with changes in the wind and rainfall.

Kitty Hawk Woods is a great place to take your family for the day! From hiking and kayaking to birdwatching and hunting, the area is abundant with recreational and educational opportunity. While hiking trails run throughout the Reserve, visitors can find public parking at several trailheads including one at the end of Ridge Road in Kitty Hawk, the end of Birch Lane in Kitty Hawk and if you’re in a 4x4 vehicle, at the intersection of Amadas Lane and Colleton Avenue. A multi-use path runs parallel to The Woods Road in Kitty Hawk and is a great place for an afternoon stroll through but will also take you to the Reserve entrance. Visitors can park at Sandy Run Park or Paul Pruitt Park to access the multi-use path or enjoy the park's recreational facilities. From the public boat ramp on Bob Perry Road, kayakers can launch into the High Bridge Creek and explore Kitty Hawk Bay and the surrounding sound waters.

Visitors to Kitty Hawk Woods will get a first-hand look at rare plant communities with a host of vegetation types including the Bald Cypress, four species of Orchids, cattails, willows, pondweed, and many globally rare species. Birdwatchers will love exploring the area, especially during annual migrations when you can catch a glimpse of both local species, waterfowl and traveling birds. Mammals you might see in Kitty Hawk Woods include racoons, owls, white-tailed deer, opossums, bobcats and river otters. A diverse selection of different amphibians, reptiles, and insects are also found throughout the reserve such as snapping turtles, Cottonmouth snakes, tree frogs, and marbled salamanders. Learn more about the Kitty Hawk Woods. 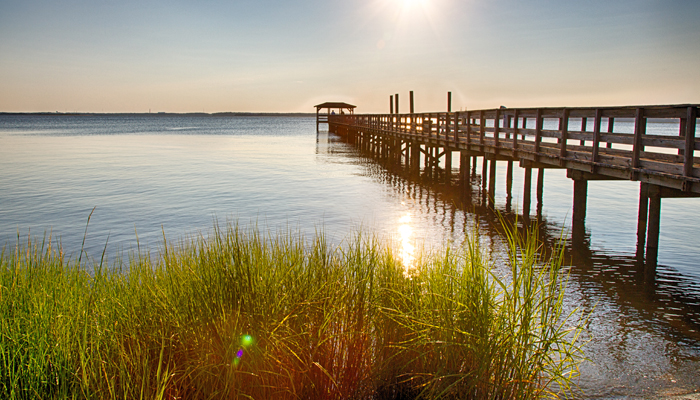 With the entrance located in Kill Devil Hills, the Nags Head Woods Preserve is one of the largest maritime forests along the East Coast encompassing over 1,400 acres across the towns of Kill Devil Hills and Nags Head. Designated a National Natural Landmark in 1974, The Nature Conservancy worked with the local community to preserve the unique ecosystem and protect its inhabitants. Since then, several hundred more acres have been donated and added to the Preserve by both landowners and the town of Kill Devil Hills. Prior to this, the land was home to a small village community with over a dozen homesites, farms, a shingle factory, churches and a school, among other structures.

Bordering the Roanoke Sound, most of the Preserve gets shielded from the wind by the tall dunes at Jockey’s Ridge. The Preserve features sound waters, dunes and wetlands as well as a vast deciduous forest with high ridges and tree canopies that are more common to mountain ranges along the Eastern US than in coastal areas.

While most of the Preserve will remain completely undeveloped, the Preserve is open to the public for recreational and educational purposes. From avid hikers to visitors just looking for a casual stroll, Nags Head Woods offers plenty of trails to choose from including The Center Trail, The Sweetgum Swamp Trail, The Blueberry Ridge Trail, The Discovery Trail, The Roanoke Trail, The ADA Trail, and the Nags Head Town Trail. Visitors should also stop by Jockey’s Ridge—the largest living sand dune on the East Coast—for incredible panoramic views. Don't forget to look for remnants of the old structures and buildings that once stood on site.

With a mix of forest land, brackish sound water and several freshwater ponds, Nags Head Woods contains over 550 plant species ranging from trees like oaks, hickories and beeches to small aquatic plants and shrubs like the Mosquito fern, tway-blade orchid, and water violets. There is also a diverse variety of fish species. Birdwatchers will love visiting this Preserve which has had over 150 species documented on site with approximately 50 Southern migrating species that will head to the area in the warmer months to nest. There are over 50 species of amphibians and reptiles to see and plenty of insect life. Over 20 mammal species have been spotted in the area including river otters, white-tailed deer, opossums and bobcats. Learn more about the Nags Head Woods Preserve. 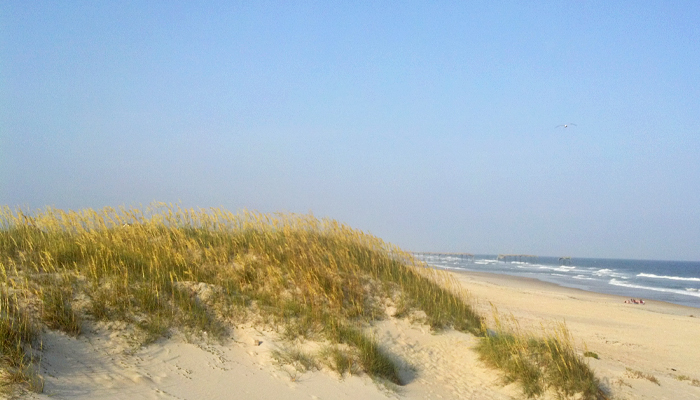 Located on Hatteras Island, Buxton Woods is part of the NC Coastal Reserve and a Dedicated Nature Preserve. Encompassing a little over 1,000 acres, the site borders the Cape Hatteras National Seashore. The southern edge of Buxton Woods is a shrub thicket community while the inland part of the reserve is maritime evergreen forest. Occurring on a series of relic sand dunes, there is various elevation along the Reserve’s ridges and sedges which are flooded freshwater marshes.

Located within the largest remaining contiguous tract of Maritime Evergreen Forest, it is a major source of groundwater recharge for the Island. Due to its geographic location in the Atlantic where the Labrador currents and Gulf Stream currents meet, the coast enjoys a diverse mix of subtropical and temperate aquatic life. Unique to this Reserve is that it contains the only occurrence of Dogwood Subtype Maritime Shrub Swamp in the world. Unlike in the northern reserves, Buxton Woods contains an abundant dwarf palmetto plants community giving a different feel to the forest compared to the other reserves on the list.

Visitors can access the Reserve via parking on Old Doctor’s Road off Highway 12 (4WD vehicles needed), Tunnel Road (4WD vehicles needed), and Water Association Road for those without 4WD. There are several trails ranging in difficulty. The easiest trail for beginners is The East Trail. For a more challenging hike, try the Ridge Trail, Lookout Loop, North Trail or Sedge Trail. Hikers should keep in mind that after periods of rainfall, low-lying trail areas (such as Sedge Trail), may be extremely wet and sometimes inaccessible. There are several instances where trails cross into the Cape Hatteras National Seashore land.

Like the other reserves along the Outer Banks, Buxton Woods is a popular stopping place for hundreds of migratory birds so birdwatchers will have plenty to see. Over 360 species of birds have been recorded in the area including gulls, bald eagles, ospreys, warblers, and peregrine falcons. You’ll also see plenty of mammals like minks, river otters, white-tailed deer, raccoons and foxes. There is an abundance of reptiles and amphibians including plenty of eastern box turtles, tree frogs and cottonmouth snakes. There are also several insect species, but you may spot 2 rare butterfly species, a rare moth species, and the Golden Silk Orbweaver spider if you’re observant. As far as plant species, you can spot everything from loblolly pines, oaks, flowering dogwoods and red cedar trees to catbriers, wax myrtles, royal ferns and pennyworts. Learn more about the Buxton Woods Reserve.