“The sea cures all ailments of man.” - Plato

Most people agree that the ocean gives them a sense of relaxation, peace, tranquility, or even clarity of mind. Have you ever wondered if those calming feelings are all in our heads or is there actually science behind the phenomenon? Not surprisingly, there is actually science that confirms these feelings of well-being. This science studies the effects of “blue space” on the mind and body. Being a newer type of scientific study, there is definitely more research needed. However, it turns out that so far, researchers agree that the beach (the ultimate blue space) provides real health benefits. That means a trip to the Outer Banks is fun and good for you!

What is “Blue Space?” To put it simply, "blue space" simply refers to a landscape or setting that is next to water. Scientifically speaking, researches from all over the world have begun looking into the concept that blue space isn’t just physically appealing but that it actually has proven health benefits on the human body – physically, mentally and emotionally.

One study published in the International Journal of Hygiene and Environmental Health in 2017 suggested that there was a “positive association between greater exposure to outdoor blue spaces and … physical activity," and possibly provides a link between outdoor blue space and general physical health

While most people understand the importance of physical health, mental and emotional health is often overlooked in our society. The fact that many of us suffer from stress related to vacation deprivation is alarming in itself. Considering that the World Health Organization estimates that over 350 million people globally are affected by depression and predicts depression will become the top contributor to disease by 2030, the importance of understanding the benefits of blue space is more relevant than ever.

A Japanese study printed in the Journal of Coastal Zone Management analyzed individuals who lived along the ocean in comparison to those who didn’t, or as the study states, “…evaluated whether coastal zones influence well-being.” The results suggested that living in coastal zones had a positive impact on the overall well-being of individuals. The study goes on to say that:

"We should consider the value of leisurely visits to the seaside to promote public health and psychological well-being. Even if it is not feasible for everyone to live in a coastal zone, some characteristics of coastal environments could be promoted to elicit relevant aspects of good health.”

Another study conducted in New Zealand and co-authored by Assistant Professor Amber L. Pearson of Michigan State University analyzed data on anxiety and mood disorders and even took into account factors like age, gender, and finances. The results showed that “increased views of blue space is significantly associated with lower levels of psychological distress.”

Early research into the positive effects of blue space is so promising that the European Union has partnered with the World Health Organization to conduct a research initiative called BlueHealth2020 to study the link between blue environments and health. 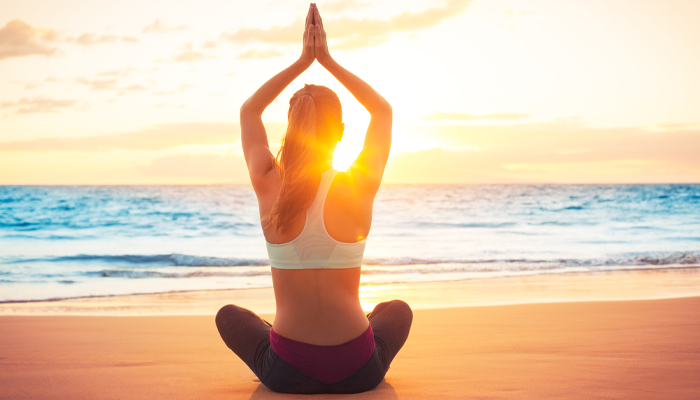 Many people believe that salt water has a positive effect on those suffering from skin, joint and respiratory conditions such as psoriasis, eczema, sinusitis, and arthritis. Using seawater for therapeutic and healing purposes is a concept that has been around for centuries. In fact, many cultures have long believed that water has healing properties. Hippocrates, a Greek physician who lived around 460 BC to 370 BC known as the “Father of Medicine”, often explored the curative powers of the water theorizing that minerals within different bodies of water had different effects on the body. Today, hydrotherapy refers to the alternative therapeutic technique of using water while thalassotherapy specifically refers to the holistic practice of using ocean water for therapeutic purposes. It isn’t just the water itself that is used for therapy – salt water products like seaweed wraps and clay masks are also used.

Sight of the Ocean

Just the sight of the ocean alone elicits a positive effect on people. From psychologists to advertising agencies, it has been long understood that the color blue is associated with calmness and serenity which is why blue is the universal favorite color. This preference may be because we naturally associate the color blue with pure, natural geographic landscapes like the sky and the sea. A book published by Marine Biologist Wallace J. Nichols called “Blue Mind: The Surprising Science That Shows How Being Near, In, On, or Under Water Can Make You Happier, Healthier, More Connected, and Better at What You Do,” explains that as we observe the water, we enter a mild meditative state. This state has been known to relieve symptoms of anxiety, stress, depression, worry, and even pain while simultaneously increasing focus and mental clarity.

“Water is considered the elixir and source of life. It covers more than 70% of the Earth’s surface, makes up nearly 70% of our bodies, and constitutes over 70% of our heart and brains. This deep biological connection has been shown to trigger an immediate response in our brains when we’re near water. In fact, the mere sight and sound of water can induce a flood of neurochemicals that promote wellness, increase blood flow to the brain and heart and induce relaxation. Thanks to science, we’re now able to connect the dots to the full range of emotional benefits being on, in, or near the water can bring.” (Nichols)

Sound of the Ocean 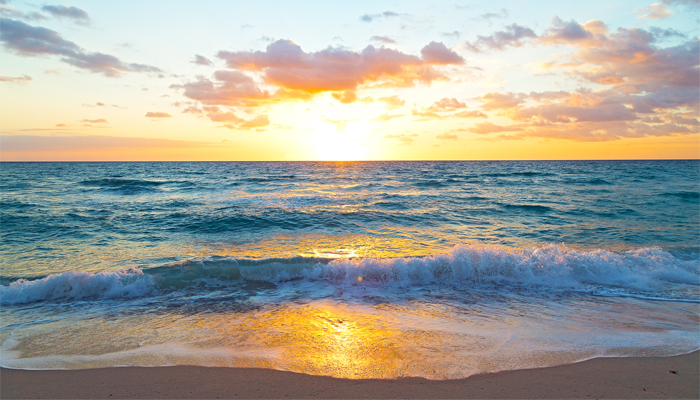 The sound of the ocean has long been associated with the same peaceful, relaxing benefits that the sight of the ocean invokes on us. Whether it’s on a noise machine you turn on to help you sleep or it’s playing in the background of your local spa, most people report feeling calmer hearing ocean waves. In fact, the sound of flowing water is a form of “white noise” in itself according to the San Francisco Zen Center’s dean, Michael Wenger, helping us keep a conscious state of relaxation and drowning out other sounds. Hardly a new concept, the sound of water has been used to assist with meditation for hundreds of years. Urban planners take advantage of this correlation and often use water features, such as fountains, to promote positive vibes in museums, schools, and other public buildings.

Smell of the Ocean 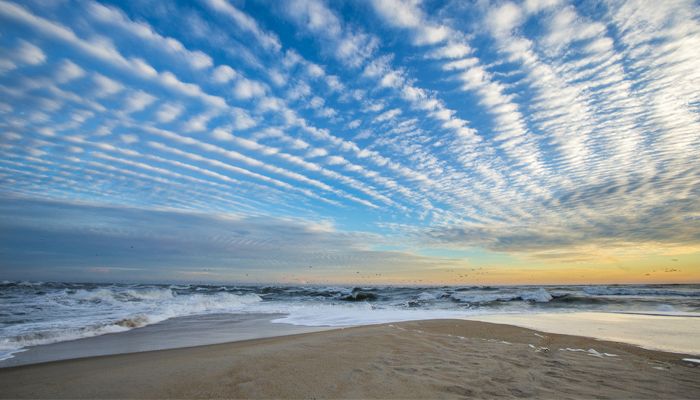 Another one of our basic senses touched by the ocean is our sense of smell. In fact, the "salty ocean air" is a scent most of us can easily recall just by reading the words and it usually triggers an associated nostalgic or positive memory from our past. The scent of the ocean is so coveted that we’ve even tried to reproduce and bottle it. Scents like “ocean breeze” are often sold in essential oils and candles to use as aromatherapy in homes and businesses.

Aside from the familiar and pleasing aroma, inhaling the ocean air is great for the body. Richard Shuster, PsyD. says that the positive feeling from a breath of ocean air may be related to the oxygen having an extra electron. In other words, the ocean air is filled with negative ions. Research shows that negative ions increase the release of serotonin which is a chemical and neurotransmitter associated with boosting energy, relieving stress, and being in a more positive mood. Additionally, negative ions can neutralize free radicals, boost immune function and decrease seasonal and chronic depression.

So next time you’re feeling tired, stressed, or just need a general mood booster, pack up the car and head to the Outer Banks! We have miles of gorgeous coastline and plenty of that fresh ocean air… what could be better than that? Let's get started.

About the Author: Jessie has been coming to the Outer Banks since she was just 5 years old. She loved it here so much that she finally relocated in 2018. Now her mission is to show the world that the Outer Banks is an incredible place that everyone should experience. When she isn't working, you can find Jessie hanging out with her friends, chilling at home with a good buck, or discovering a new Outer Banks adventure.