June marks the anniversary of picking up the 4,400 ton, 200 foot tall black and white spiraled Cape Hatteras Lighthouse and moving it 2,900 feet to the southwest. A wild feat of engineering!

But what's the scoop? Seems like a crazy amount of effort. Why...and how...was it done?

For the June installment of our OBX History blog series, we're going to take trip in the way-back-machine to understand a bit more about the Cape Hatteras Lighthouse - what is it, where it came from, why it needed to be moved, and how it was moved. 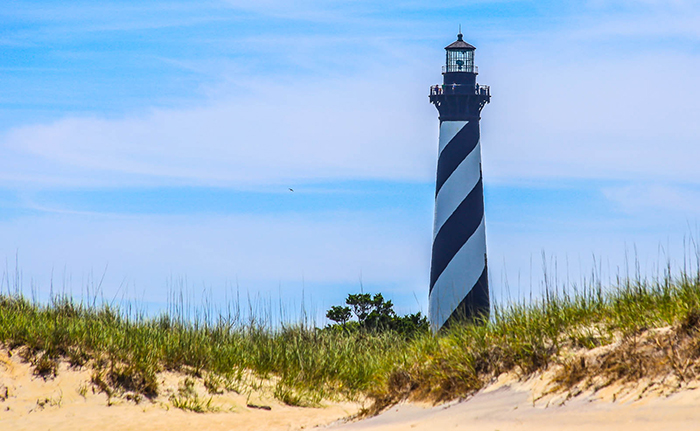 As with most research these days, Wikipedia is a great place to start. :) Here are some highlights about the Cape Hatteras Light:

Why Does Cape Hatteras Need a Lighthouse?
The OBX is referred to as the "Graveyard of the Atlantic" for good reason. Atlantic Ocean currents just off the coast of the Outer Banks have historically made for excellent travel for ships, except in the area of Diamond Shoals, just offshore at Cape Hatteras. The warm Gulf Stream ocean current collides with the colder Labrador Current, creating ideal conditions for powerful ocean storms and sea swells. As a result, sandbars are constantly shifting, and predictable navigation becomes very difficult... and shipwrecks happen when sandbars surprise captains.

To aid in navigation around the Outer Banks, Congress authorized the construction of the Cape Hatteras Lighthouse.

The original Cape Hatteras Light was completed in 1803, but due to a weak light and damage sustained during the Civil War, a second lighthouse was approved and completed in 1870, 1,500 feet from the ocean.

The ocean has been inching closer to the Light since it's completion in 1870; waves gnawing at the beach, and relentless moving towards the tower. Over the years, many attempts have been made to arrest the encroachment of the persistent surf, but little progress was made.

The tower was in and out of commission on a few occasions as efforts were made, but in the end, Mother Nature is a difficult foe to tame. Storms drag sand from the small strip of beach deposit on the Sound side. A western migration of the OBX that has proceeded for thousands of years. Trying to stop this unrelenting, natural process is a thankless task. By 1970, the Lighthouse was just 120 feet from the ocean; a small step from toppling into the sea.

As we've experience with the heated OBX bridge debates recently, nothing happens quickly on the Outer Banks. It seems like the Cape Hatteras Lighthouse was in a precarious position since the early 1900's, yet the decision to move it was not made until almost 100 years later.

After much debate, including a plan to build a wall around the Light, which would have ultimately created a little island, the decision was made the move the Light 2,900 feet to the southwest.

The Lighthouse has a storied history, is an iconic symbol, and still serves as a beacon to passing ships in dangerous water. As crazy as it seems to move a4,400 ton, 208 foot tower 2,900 feet (oh, and by the way, the ocean will keep progressing towards it!), the OBX was not prepared to let the candy striped pole slip into the watery grave.

Congress appropriated the funds in 1998, and the move Cape Hatteras Lighthouse move was on in June 1999.

How was the Cape Hatteras Lighthouse Moved?

How exactly do you move such a monster? Very carefully. :) Here's a great explanation from the National Parks Service, and here are a few highlights...

If you've never been to the Cape Hatteras Lighthouse, it is well worth the trip. A gorgeous beach - with great surfing, a historical site, and an amazing view. And now you have some great history to impress (or bore) your kids with!