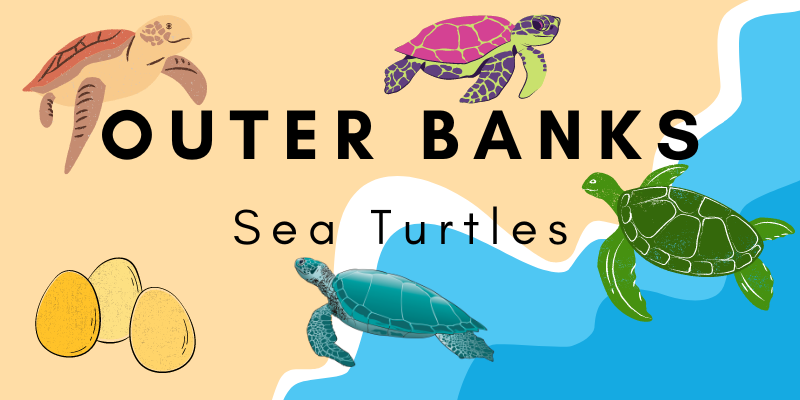 The Outer Banks is known around the globe for its spectacular beaches, warm waters, and beautiful wildlife. From red foxes to dolphins to sea turtles, the wildlife that has called the Outer Banks home for centuries is part of what makes it an amazing place to visit. Each year, hundreds of sea turtles are born on the Outer Banks shoreline before making their way into the Atlantic Ocean where they will live out the rest of their days, many of them returning to lay eggs in the following years. These beautiful creatures come ashore to build their nests and lay their eggs before returning to the water. And while they spend most of their lives in the ocean, sea turtles do breathe air and must return to the surface regularly for air. Healthy turtles remain in the ocean for all of their lives, while females come to shore only to lay their eggs.

All five of the sea turtle species that visit the Outer Banks are considered endangered under the Endangered Species Act, meaning that it is illegal to attempt to harm them or their eggs. Keep reading to find out more about nesting season on the Outer Banks, conservation efforts, and what you can do to help keep these sea turtles safe. 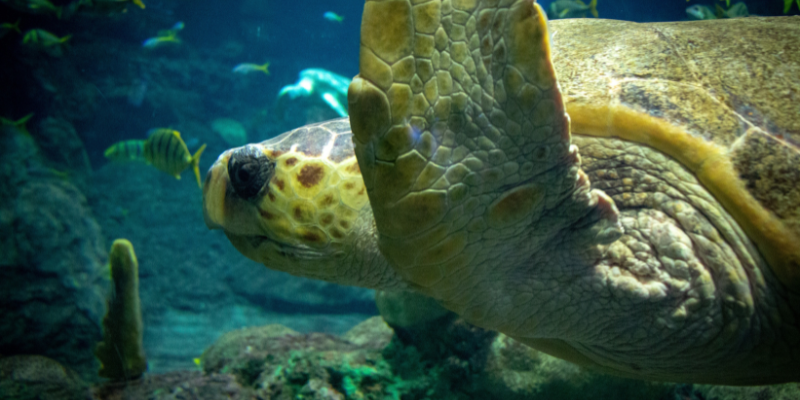 What do Sea Turtles Eat? 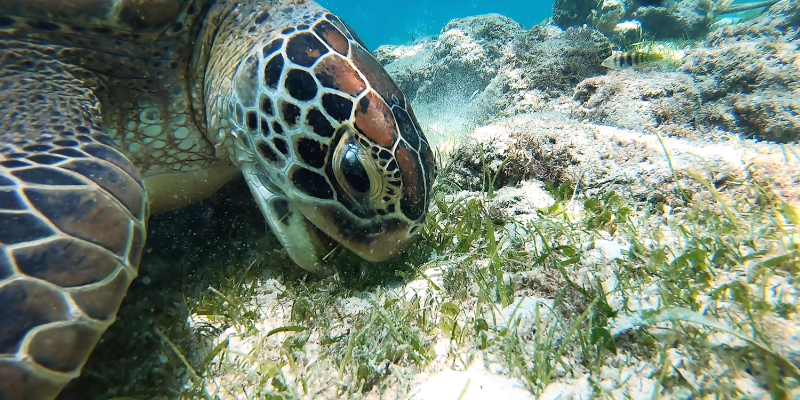 Of the sea turtles that visit the Outer Banks, most of them are omnivores (meaning that they eat both animals and plants). Loggerheads, when born, will eat plants like seagrass and algae as well as animals and once they are adults, their preferred foods are crabs and conchs. Hawksbills generally prefer sea sponges while Leatherbacks are known for eating jellyfish and sea squirts (as well as plastic bags and balloons that make their way into the ocean, so PLEASE throw away your trash and don’t release balloons). Kemp’s Ridley sea turtles only eat meat and prefer crabs while Green sea turtles primarily eat plants like seagrass and algae. The other 2 species of sea turtles that aren’t known for visiting the Outer Banks, Flatbacks and Olive Ridley, are omnivores and will eat everything from seaweed to shrimp to jellyfish and even fish.

Hatchling Season on the Outer Banks 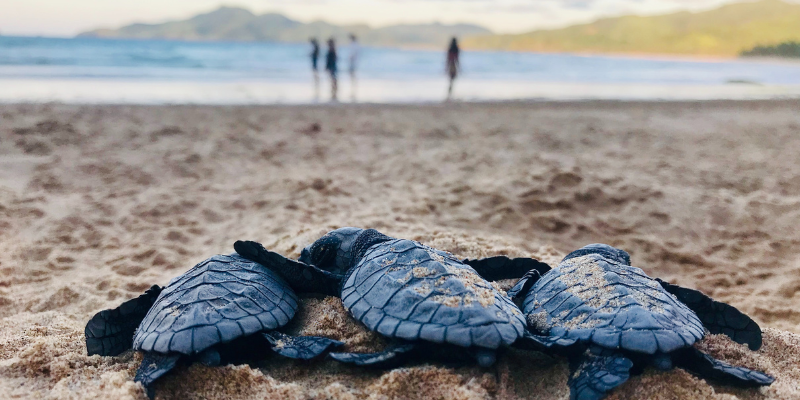 Because of its temperate climate, the Outer Banks has become prime real estate for female sea turtles looking to lay their eggs in cooler waters. And even though our sea turtle numbers don't come anywhere near places like the Caribbean, beaches in the mid-Atlantic and the southern United States are important for balancing the population of sea turtles.

Why you may ask?

From about the end of April through August, female sea turtles start visiting the beaches of the Outer Banks in search of a safe place to lay their eggs. 50-80 days later, so from May to September, hatchlings start digging their way up from their deep, underground nests and head for the water, guided by the light of the moon.

During this time period, local volunteers with N.E.S.T., a non-profit organization whose goal is to protect sea turtle nests, patrol the beaches from South Nags Head all the way to Virginia in order to find, tag, and protect sea turtle nesting areas. This allows volunteers to then track an estimated time of hatching when another team of volunteers will spend several evenings “nest sitting” to ensure that as many hatchlings as possible make it to the water unharmed. The time and kindness of these volunteers prevent predators from harming the hatchlings and keep them from heading toward any beachfront lighting, which baby sea turtles sometimes mistake for the light of the moon over the ocean. 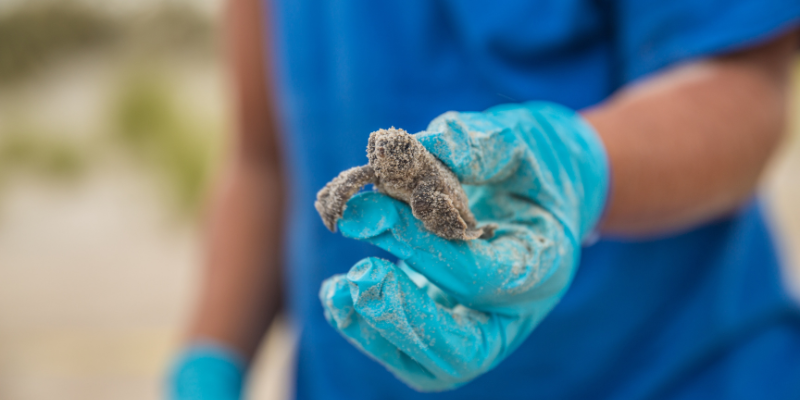 When it comes to sea turtle preservation on the Outer Banks, the Network for Endangered Sea Turtles, or N.E.S.T., is going to be the primary contact and volunteer agency. Created in 1995, N.E.S.T. is a non-profit organization whose mission is to protect sea turtles and other marine wildlife on the Outer Banks. Dependant on the work of their volunteers, N.E.S.T. is known for protecting nests and sea turtle hatching, conducting ATV beach patrols of the beaches from the Virginia border to South Nags Head, helping the North Carolina Aquarium on Roanoke Island with sea turtle rehabilitation and rescue, and ongoing support of sea turtle research and education.

If you manage to make your way down to the North Carolina Aquarium on Roanoke Island, which you absolutely should during your Outer Banks vacation, you’ll be able to see the products of N.E.S.T.’s rehabilitation work firsthand in the STAR Center where injured sea turtles are treated before being released back into the wild. You’ll get an inside look at how N.E.S.T. and the North Carolina Aquarium work to help sick and injured sea turtles while participating in the larger mission of sea turtle conservation.

N.E.S.T. volunteers alongside scientists and National Park Service technicians also conduct excavations of recently hatched nests, determining the number of empty shells and unhatched eggs in the nest as well as sometimes finding trapped hatchlings who they assist in their journey to the water. These excavations are essential for helping scientists better understand the lifecycle of sea turtles and find ways to track the number of turtles nesting on the Outer Banks in order to improve ongoing research and conservation efforts. For the status of current nesting sites on the Outer Banks, you can visit N.E.S.T.’s website here.

In fact, these excavations are not only helpful for tracking the number of sea turtles being hatched on the Outer Banks, but scientists also sometimes find live sea turtles who still need a little help getting out of the nest and to the ocean. Earlier this year, volunteers actually found a leucistic loggerhead hatchling at the bottom of one of the nests. This is actually a relatively rare genetic mutation where the hatchling appears mostly white, almost albino, with white color and brown eyes. Thanks to the excavation, the hatchling was able to make its way out into the water to begin its life in the ocean.

How You Can Help Sea Turtles on the Outer Banks 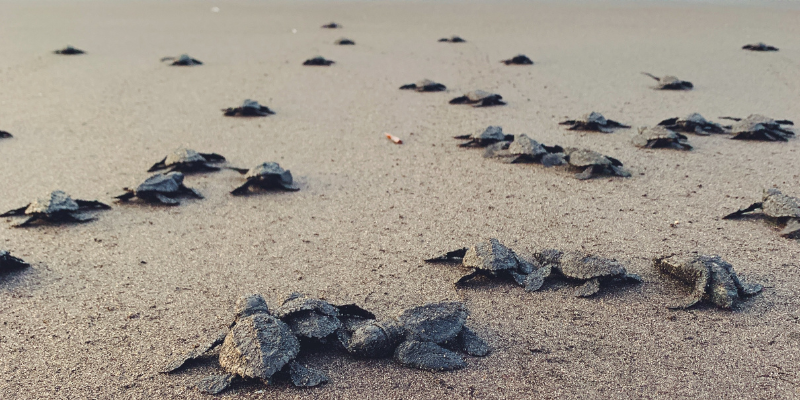 Sea turtles are a beautiful part of the Outer Banks ecosystem and it’s important for us humans to do our part to help protect them and the environment in which they live. Even if you don’t live on the Outer Banks year-round and can’t volunteer with a group like N.E.S.T., there are still quite a few things you can do during your stay to help ensure the survival of these amazing creatures.

Whether you’re hoping to catch a glimpse of a sea turtle nest or you’re planning to see some other Outer Banks wildlife, like dolphins or jellyfish, any time of year is great to explore the beauty of the Outer Banks ecosystem and enjoy the best of nature in the OBX. And what better way to do that than to stay in the comfort of an awesome Outer Banks beach house? Seaside Vacations offers a variety of houses for every type of family group, from quaint oceanside cottages to large, secluded rentals with plenty of space for everyone in your family group. Once you stay with Seaside Vacations, you’ll never want to stay with anyone else. Check out our available rentals and be sure to book your next Outer Banks vacation today! 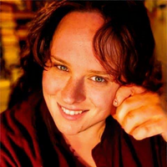 About the Author: Lauren is a mom, author, and travel enthusiast. She grew up on the Outer Banks and only left for a few years to get her degree at UNC-Chapel Hill and complete a tour in the Coast Guard before making her way back to the beach in 2017. When she isn’t writing for the Seaside Vacations Travel Blog, Lauren can usually be found with a book and cup of tea in hand, planning her next travel adventure.