6 Splendid Reasons to Spend Thanksgiving on the Outer Banks

As the official start of the holiday season (and Christmas music), Thanksgiving brings together families for a chance to catch up with each other. Most people head home for Thanksgiving every year - why not get the family together for a week-long vacation on the Outer Banks? Sure, grandma's house will do, but why not spend time together in a house with a view? Although eggnog and turkey stuffing aren’t one of the great reasons listed below (don't worry, we have both on the Outer Banks), there are plenty of other splendid reasons to spend time with family and friends on the OBX this Thanksgiving.

Week Away with Family and Friends

Thanksgiving is about more than just good food and time off work/school, it’s a chance to see family members that you may only see once a year.  It’s the perfect holiday to catch up with family and friends and enjoy spending time with each other (and delicious food).  If you spend Thanksgiving at the beach, there are plenty of Outer Bank vacation rentals that are spacious enough for the whole family (distant cousins included). You don’t have to spend just a few hours together, spend an entire week! :)

A majority of the folks who visit the Outer Banks are from somewhere with a high chance of snow around late-November. Typically on the OBX, the threat of snow showers is minimal and temperatures here remain warmer than most parts of the United States. On average, temperatures hover between 63°F and 48°F. Not bad for late-November.

Black Friday Shopping Without the Crowds

While most major shopping centers around the nation are overcrowded with bargain hunters, our stores on the Outer Banks have the same if not better deals without the ridiculous crowds/wait. Outlets Nags Head is the perfect spot to find great black Friday deals at stores like: Nautica, Coach, Ralph Lauren, Gap and J. Crew.

Although the water is colder and there are fewer anglers on the Outer Banks, Thanksgiving is one of the best times of year for fishing. Offshore boats are still active and you can still book a charter fishing excursion with some vessels out of Oregon Inlet and Pirate's Cove. All of our pier's are open and have fairly "normal" operating hours compared to the summer months.

How could you make a top list about the Outer Banks and not include something about the beach? Of course the Atlantic Ocean doesn't go away during the fall/winter, but you may not be aware that on most days, the weather is favorable for a relaxing walk on the beach with family/friends. You can feel less guilty about downing four turkey legs and three helpings of stuffing after a several mile stroll on the beach. As mentioned above, the average temperatures here are fairly mild compared to the rest of the country and you stay warm and comfy with just a light jacket and hat.

November is considered an "off season" on the Outer Banks and it's the perfect time of year to save a TON of money on a rental home. Seriously, you can save well over 50% on most Outer Banks rentals compared to peak-season (mid-summer) prices. Most of our Outer Banks rental homes have large, well-equipped kitchens that are perfect for preparing a savory feast for the whole family. Don't feel like cooking? No problem! You're on vacation anyways and there are plenty of Outer Banks restaurants that offer traditional Thanksgiving dinners. 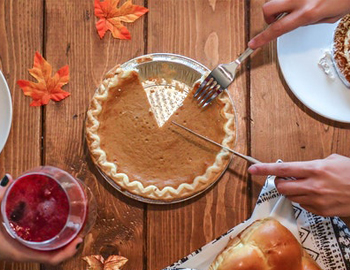