Celebrate the 50th Anniversary of Apollo 11 on the Outer Banks

The world has long been fascinated with Outer Space. It’s crazy to imagine that decades ago, the concept of actually exploring space seemed impossible when today, space exploration is a continuously growing multi-billion-dollar industry. This year marks the 50th anniversary of one of the most influential and well-known space exploration achievements: The Apollo 11 Moon Landing of July 20, 1969. Ask anyone who lived through the early stages of the Space Race and chances are, they can remember with absolute precision exactly where they were and what they were doing when they watched the news coverage of this successful launch. Even those of us born after 1969 relish the moment as astronauts Neil Armstrong and Buzz Aldrin have lived on as household names in everything from textbooks to pop culture. This month, there will be celebrations all over the nation in honor of the anniversary of this incredible event but you can celebrate the 50th Anniversary of Apollo 11 right here on the Outer Banks!

Residents and visitors will be able to celebrate the 50th anniversary of this momentous flight by taking part in various programs and events from July 18th, 2019 through July 21st, 2019. The celebration kicks off at Dowdy Park in Nags Head and the schedule of events is as follows: 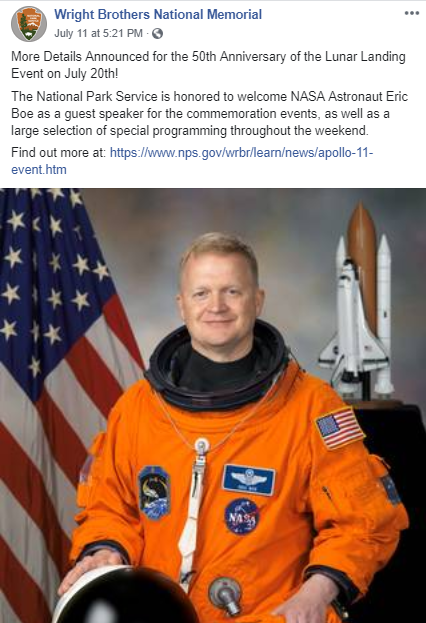 Fifty years ago, hundreds of visitors gathered around for a live broadcast of the moon landing at the Wright Brothers National Memorial and now you get a chance to relive that important moment in history! Joining the celebration is NASA astronaut Colonel Eric A. Boe as special guest speaker. Not only will he be giving a presentation on his experiences but you’ll get an opportunity to meet him for yourself!

Visitors are encouraged to bring beach chairs and flashlights for the re-broadcast. Food will be provided for purchase by various food trucks on site. Visitors are also encouraged to dress up as astronauts or in 1960’s costumes. In the Junior Aviator Store, special kid-friendly activities will be provided by the NPS and NASA Langley Research Center.

*Park Admission Fees for July 20th will be waived in honor of these events.

For more information about these events or for the full detailed schedule, visit https://www.nps.gov/wrbr/planyourvisit/apollo-11-50th.htm 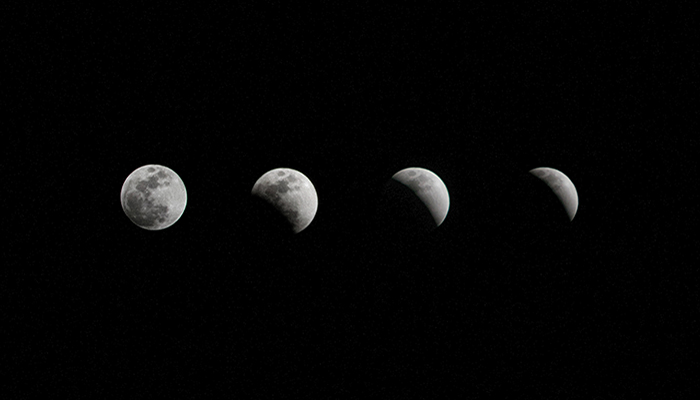 Following World War II, tensions between the Soviet Union and the United States led to a period known as The Cold War. The Cold War was a conflict between two politically influential superpowers in which many feared the outbreak of another war—one that could be catastrophic due to the development of nuclear weapons. As a result, political, militaristic and economic competition emerged between the two nations. One particular competition was over space exploration and became known as the "Space Race."

In 1955, both countries announced their plans to launch a satellite into space a few days apart, thus beginning a “race” between both nations to develop and successfully launch instruments specifically designed for orbit. In 1957, it would be the Soviet Union who prevailed with the launch of the first artificial Earth satellite into Space. This satellite, named Sputnik 1, orbited Earth for three weeks with a distinct radio signal that was easily detectable back on Earth. The reaction of the American public was one of shock and determination. With the increase focus on technological research, science, and engineering, a more aggressive approach was taken in order to compete in the race. A few months later, the Explorer 1 satellite was launched by the US.

In 1958, President Dwight D. Eisenhower recommended that a civilian agency be established to embrace the age of space exploration and shortly after, the National Aeronautics and Space Act was signed on July 29, 1958 establishing the National Aeronautics and Space Administration (NASA). A federal agency directing space exploration for military purposes, the Advanced Research Projects Agency (ARPA), had already been created earlier in the year.

Meanwhile, the USSR had another successful first on April 12, 1961 when Yuri Gagarin became the first human in space with the launch of the Vostok 1 spacecraft. The US responded the following month with the successful flight of the Freedom 7 in which Alan Shepard became the first American in space. The event was televised and he was celebrated as an American hero receiving the NASA Distinguished Service Medal and Distinguished Flying Cross. (In 2011, the United Nations proclaimed that April 12th would be known as the International Day of Human Space Flight to celebrate the anniversary of Gagarin’s flight).

At this point, American public opinion was in jeopardy as the Cold War was ongoing and NASA’s advancements seemed to always be one step behind those of the Soviet Union. On May 25th, 1961, President John F. Kennedy famously made an appeal to Congress stating that he believed America should commit to landing a man on the moon before the end of the decade. NASA focused on this feat exclusively and launched the Apollo program. Both the US and the USSR unfortunately suffered from early design flaws in the race to reach the moon in which astronauts from both nation’s were lost in various accidents. Ultimately, however, spacecraft flaws were addressed, missions were refined, and their persistence paid off.

On July 20, 1969, Apollo 11 successfully landed on the moon with astronauts Neil Armstrong and Buzz Aldrin in tow making them the first humans to ever land on the moon. A few hours later, Armstrong took the first moonwalk and uttered “That’s one small step for man, one giant leap for mankind,” a phrase that would be permanently engraved in American history. 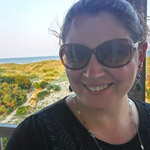