If you’ve ever been driving down US Hwy 158, noticed a remarkable granite structure towering among the dunes and thought to yourself, “Wow, that’s incredible,” you’re not alone. Most visitors to the Outer Banks know that it is an area rich in some of our nation’s greatest history… from Blackbeard roaming the open seas to the disappearance of the first English-born child on Roanoke Island, a trip to the Outer Banks is a visit back in time. One historic landmark that you don’t want to miss when you visit is the Wright Brothers National Memorial. Located in Kill Devil Hills, the Wright Brothers National Memorial stands as a testament to America’s scientific discovery and technological advancement in the world of modern aviation.

Who Were the Wright Brothers?

Wilbur and Orville Wright grew up in Ohio but were born in Indiana to parents Milton Wright and Susan Catherine Koerner. Growing up, Wilbur (1867-1912) excelled in his studies and was a talented athlete. Orville (1871 – 1948) was also a bright student, with a passion for inventing and conducting experiments to figure out how things worked. Both brothers were highly educated, despite not technically completing their high school curriculum or obtaining a college degree and shared a true appetite for learning.

Over the years, the Wright brothers dabbled in a variety of jobs. In the late 1880s, the brothers worked together on several publications and local papers utilizing a printing press of their own design. Their exploratory minds kept them fascinated by all things mechanical and following the bicycle trend that emerged in the late 1800s, along with their love for cycling, the brothers decided to open a bicycle repair shop in 1893. It quickly took off and by 1895, Wilbur and Orville had over 2 dozen bicycle shops in which they rented, sold and repaired bicycles and equipment. In 1896, their own design was manufactured and introduced into their shops. Their captivation in mechanics, however, was not strictly limited to bicycles. The brothers were adamant supporters of researcher Otto Lilienthal who experimented in the science of aeronautics. After Lilienthal’s death due to a failed experiment, Wilbur and Orville decided to do some research of their own and dive into the aviation field. 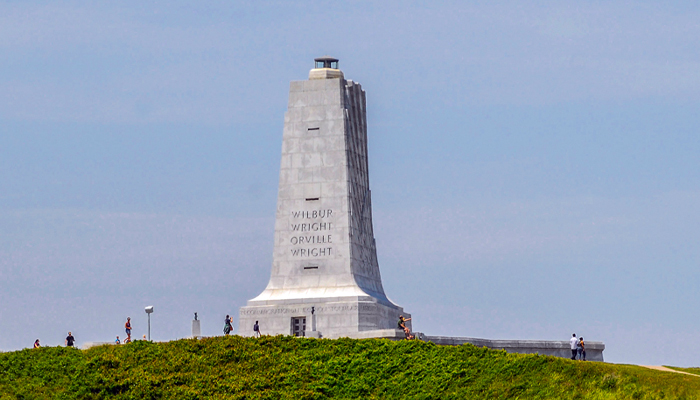 Both brothers understood important challenges to aeronautics including concerns like balance, propulsion, wind resistance, control, and structure weight and integrity. Beginning in 1899, Wilbur and Orville would go on to test a series of experiments in flight using hang gliders, recording the data and adjusting their designs with each try. Needing open space with robust winds, the Wright brothers decided that Kitty Hawk, NC had the most favorable conditions for achieving flight. After hundreds of tests, redesigns, and small successes with the glider, the Wright Flyer I (a heavier-than-air powered plane) was built.

On December 14, 1903, Wilbur took to the air for a 3-second flight in Kill Devil Hills. On December 17th, Orville launched the flyer for more successful flights… the first lasting 12 seconds and traveling 120 feet. The last flight that day was made by Wilbur and lasted 59 seconds traveling 852 feet (260 meters). This may not sound far but it was a groundbreaking success in the aviation world. The flight was only witnessed by 5 other people – three members of the coastal lifesaving crew, a businessman and a teenage bystander – and many did not believe their claim. In Europe, they found a receptive audience and made many public flights but eventually found their way back to the United States where they continued to work on airline contracts. It wouldn’t be until the 1920’s when the government officially recognized Wilbur and Orville Wright as innovators in aeronautics. President Calvin Coolidge signed a bill in 1927 to build the Wright Brothers Monument National Memorial in Kill Devil Hills, NC.

The memorial was opened on November 14, 1932. Unfortunately, Wilbur had died many years earlier, but Orville attended the ceremony. The structure, still standing today, was made from 2,000 tons of gravel, 800 tons of sand and 1,200 tons of granite. On the 50th anniversary of the flight, the land became a national park as the National Park Service commemorated the Wright Brother’s with recreations of their glider and construction of a visitor’s center and museum. In December 2003, the 100-year anniversary of the Wright Brothers’ flight was honored at a special centennial ceremony hosting guests like Neil Armstrong, Buzz Aldrin, and former president George W. Bush. 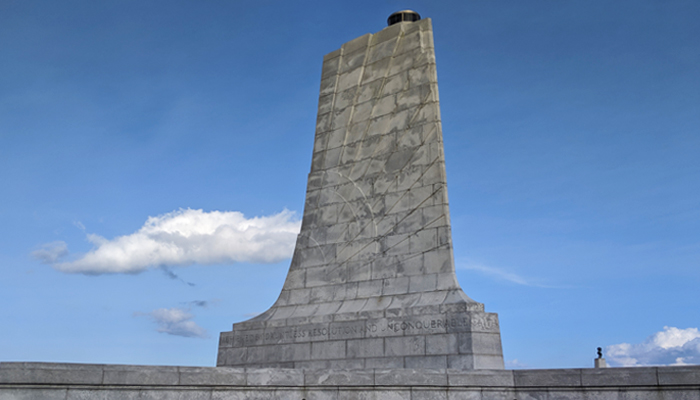 In a world where hopping on a large commercial airline and traveling to another country is as easy as booking the flight on your smart phone, visitors to the Wright Brothers Memorial will get to experience a time when the concept of human flight seemed impossible. A dream to those innovators who chased it and a wonder to those who watched the dream come true. The 428-acre park includes not only the picturesque monument but also a replica of the living quarters and hangar used by the Wright Brothers and a museum featuring a full-scale reproduction of the 1902 glider and the 1903 flying machine, a reproduction of the wind tunnel used to conduct early experiments, interactive displays, and many educational galleries. The adjacent Centennial of Flight museum includes artifacts reflecting the history of aviation and exhibits donated by NASA that celebrate the future of flight.

The park is open 7-days a week all year. A small entrance fee is charged for those over the age of 16 but annual passes can be purchased. You don’t have to be an aviation enthusiast or a history buff to enjoy a visit to the Wright Brothers Memorial but if you are, a variety of events are hosted at the park throughout the year and can be a great place to take your family while you’re on vacation.

In 2018, after undergoing renovations beginning in 2016, the Wright Brothers Memorial re-opened to the public. Not only were the structures updated but many new interactive exhibits were added. With the new exhibits, visitors can learn more about the Wright Brothers themselves, discover how their unique bicycle designs influenced wing-warping and examine how their inventions inspired modern aviation. 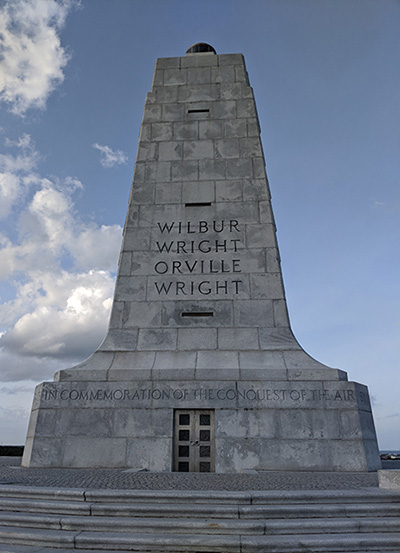 >>The original Wright Flyer, which was extensively damaged upon landing and was never flown again, was restored in 1985 and is housed at the National Air and Space Museum in Washington D.C.

>>Pieces of wood and fabric from the original Wright Flyer were taken aboard the Apollo 11 lunar module and are on display at the museum. Pieces were also taken on Space Shuttle Challenger’s tragic mission STS-51-L. The pieces recovered from the explosion are on display at the North Carolina Museum of History in Raleigh, NC.

>>The Wright Brothers were awarded a Congressional Medal of Honor in 1909 “in recognition and appreciation of their ability, courage, and success in navigating the air.”

>>In 1911, The Model EX aircraft (a modified version of the Wright Brothers successful Model B commercial aircraft) was purchased by private citizen Cal Rodgers, who also received a personal flying lesson from Orville. Sponsored by company Vin Fiz for a public coast-to-coast flight, Rodgers successfully flew across the country in 3 months (there were several crashes with injuries to Rodgers and damage to the flyer that needed to be repaired).

Step Inside the Memorial