In 1975, NCDOT first saw the potential need for a bridge across the Currituck Sound. By 1995, plans for the bridge were officially underway. Supporters for the bridge argue that it could alleviate traffic during peak tourism months and provide an alternate hurricane evacuation route out of the Outer Banks. Now that NCDOT has official approval to move ahead with the construction, the next step is for officials to obtain any necessary permits as well as the land needed for the project.  NCDOT reports that the project’s total estimated cost will be approximately $440 million dollars with plans to recoup part of these expenses through toll revenue. The project includes building two bridges (a 1.5-mile long bridge across the Maple Swamp and a two-lane 4.7-mile long toll bridge across the Currituck Sound) and making some upgrades to parts of N.C. 12. The estimated completion date has not yet been determined. 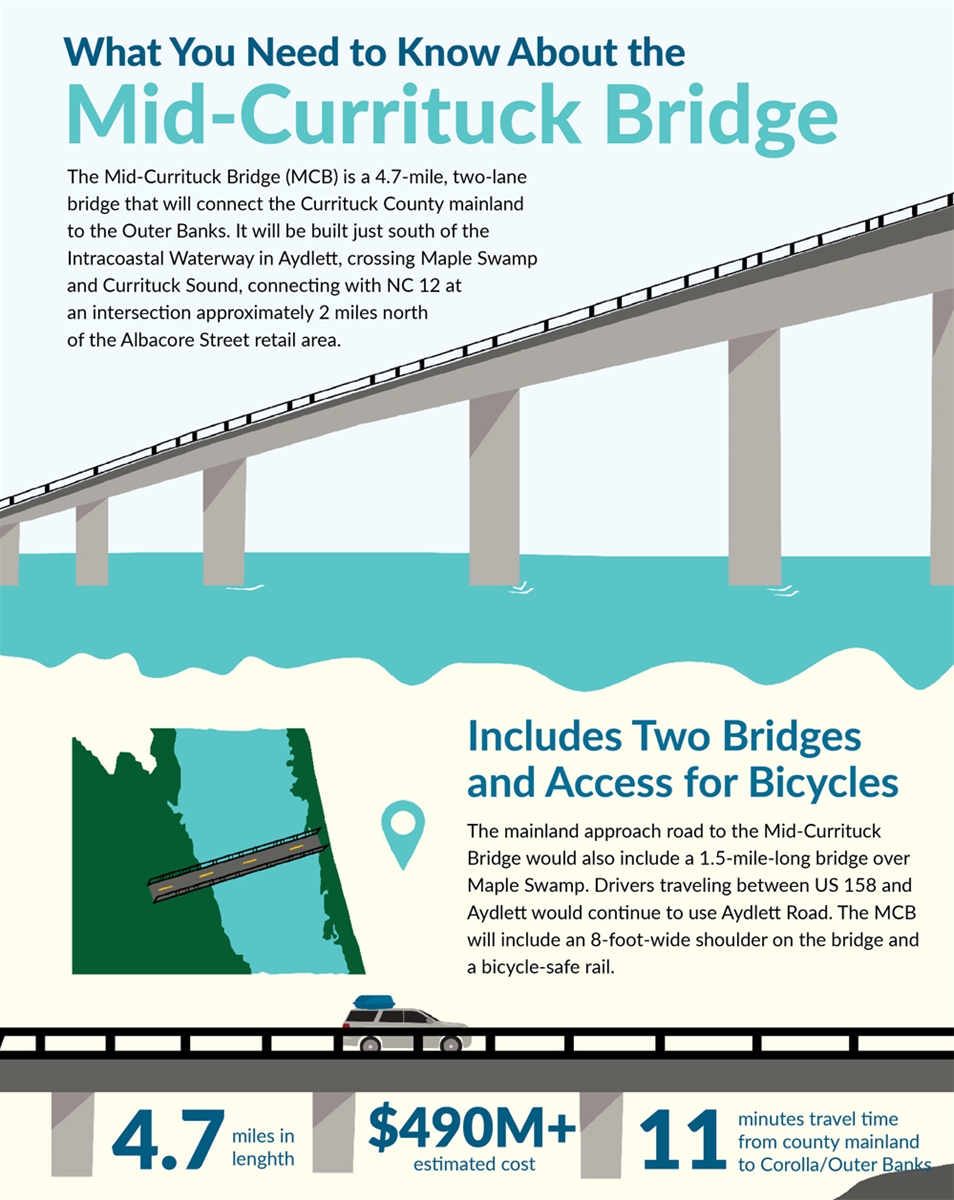 What the Bridge Means for Visitors

If you’re a repeat visitor to the Outer Banks during the busy travel season (specifically, Saturdays and Sundays during the Summer) and you come in on US-158 through Currituck County, you know one thing to be absolutely true: you better cross the Wright Memorial Bridge by noon at the absolute latest. Traffic tends to bottleneck on US-158 in the Southern Shores/Kitty Hawk area at the intersection where visitors can either choose to take a left turn onto NC Hwy 12 North to Duck and Corolla or continue to head South to the rest of the Outer Banks. This bottleneck gets so bad during peak tourism months that traffic will sometimes back up along US-158 on the mainland for miles before the Wright Memorial Bridge. Add bad weather, any road construction or a traffic accident and you’re stuck sitting for hours if you wait until too close to check-in time.

The traffic flow is also busy during the day from Southern Shores up to Corolla. With just one way in and out, the traffic causes potential road hazards for both vehicles and pedestrians – resident and visitor alike. And traffic during evacuations all across the area? You don’t even want to know.

To give you a better idea, visitors who stay in Corolla have a 42-mile drive from Gravedigger (Digger’s Dungeon in Poplar Branch) to the Currituck Beach Lighthouse. This trip is south for 20 miles on US-158, across the Wright Memorial Bridge and then back up a 2-lane winding road North for another 20 miles. With pristine beaches and many fun attractions, we can’t blame visitors for loving Corolla but since the trip is one big U-shape, it’s also understandable that it can be a frustrating drive. Ironically, by the time visitors reach their destination, they end up on the same horizontal GPS coordinate plane that they were in almost an hour ago. An hour is assuming there were no traffic back-ups, which is unfortunately unlikely if you’re traveling after noon.

No one wants to start off a vacation with traffic delays as that can seriously sour your week and make everyone grouchy - crossing the bridge and feeling that ocean breeze is supposed to have the exact opposite effect. Unfortunately, there aren’t many options to alleviate this traffic – except to build a bridge. 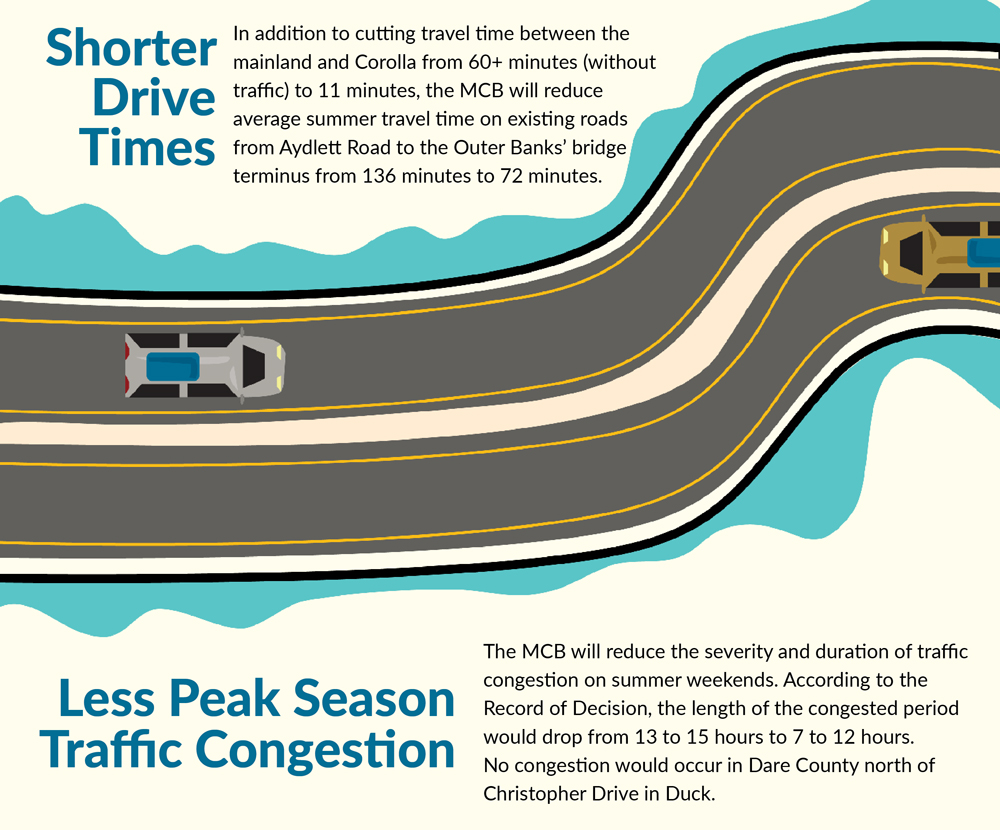 The Mid-Currituck Bridge will connect mainland Aydlett, NC to Corolla, NC. This bridge will essentially create a shortcut for visitors heading to the Northern OBX and could cut off roughly 40 miles and up to 2-hours of travel time. Additionally, it will alleviate traffic across the Wright Memorial Bridge and at the infamously congested intersection making it easier for visitors staying in Kitty Hawk, Kill Devil Hills, Nags Head, Roanoke Island or Hatteras Island to reach their destination. Residents and visitors traveling from Duck to the central OBX area for work or tourist purposes will also be able commute more quickly. Lastly, evacuation times (which did not meet state standards as of 2018), should decrease drastically with another route out of the area. Other benefits include better transport times for first responders, less fuel consumption for travelers, and economic growth in both Currituck and Dare counties. 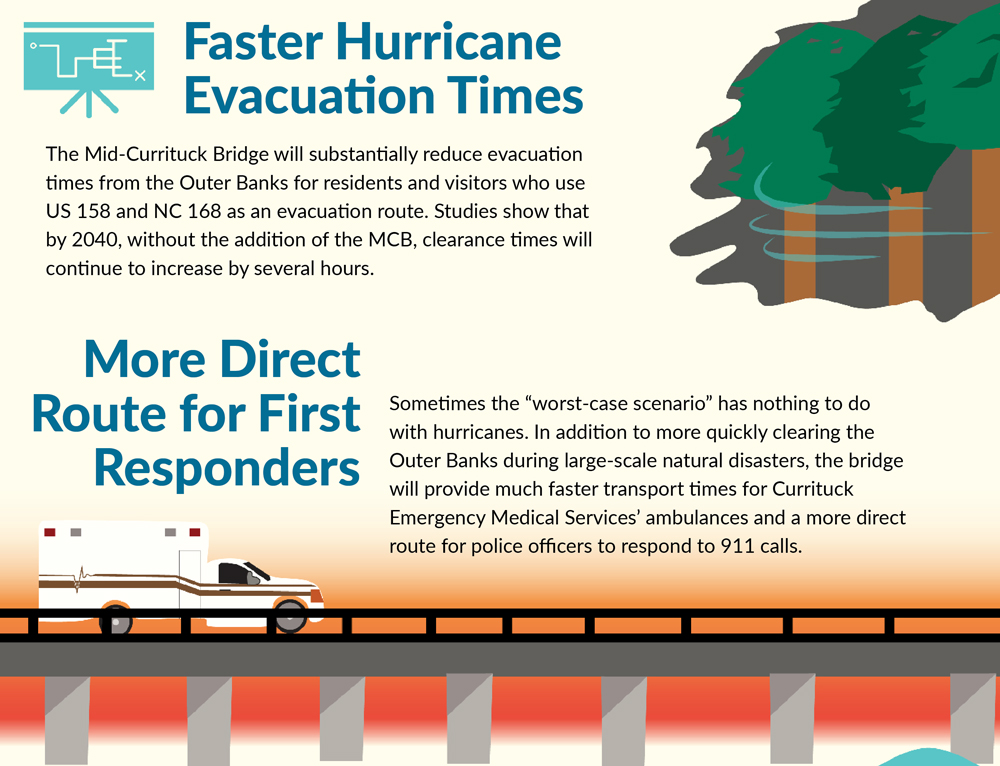 Don’t Forget: Bookmark this article to stay tuned in – we will provide additional updates as construction begins! 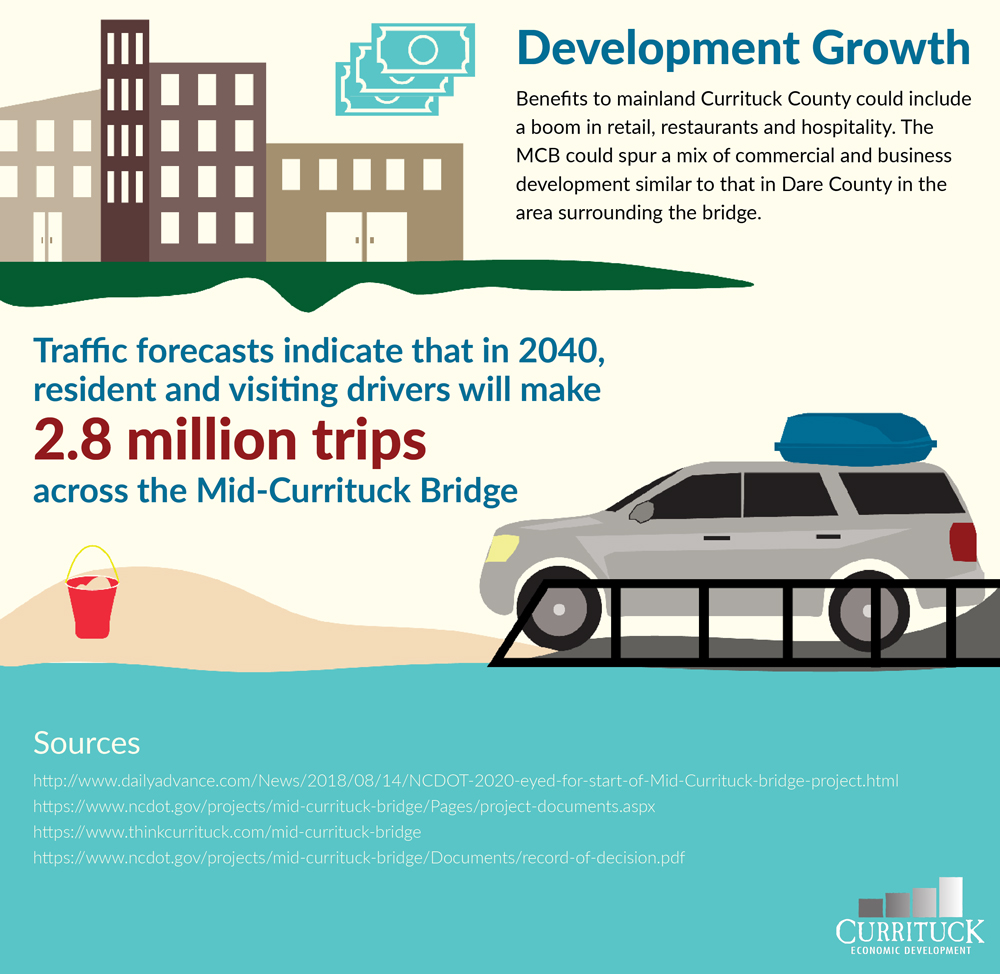 *Image of future bridge map is sourced from the NC Department of Transportation. All other infographic images on this page are found on the Currituck County infographic website.

April 2019: On April 23rd, the Southern Environmental Law Center (SELC) and the North Carolina Wildlife Federation along with the No Mid-Currituck Bridge citizens group took legal action to challenge the progression of the Mid-Currituck Bridge. The groups had 150 days from the Record of Decision to file a lawsuit and did so within that time frame. The challenge cited that construction of the bridge would cause damage to the Currituck Sound, invoke expensive tolls that most tourists couldn't afford, and would only be utilized a few months of the year. Another point of contention was the need for a newer environmental impact analysis along with public input as the original EIS was released in 2012. As an alternative, the group suggests other changes to improve traffic flow such as making improvements to NC 12 (widening select areas and replacing traffic lights with roundabouts) and incentivizing rental companies stagger their check-in days/times.
Read the complete document: North Carolina Wildlife Federation et al v. North Carolina Department of Transportation et al.