While the Outer Banks is the ideal beach destination for families, there are still many risks involved with swimming in the Atlantic—the biggest of which is rip currents. If you’ve been visiting the East Coast for any amount of time, you’ve likely heard about the dangers of rip currents, but if you’re a first time visitor, it’s important to educate yourself on proper ocean safety to ensure your vacation is an incredible and safe one. Last month, NOAA (the National Oceanic and Atmospheric Administration) unveiled a new rip current forecasting model that can predict the probability of rip currents by the hour for up to 6 days out. This type of technology could greatly improve current rip current warning systems and help save lives. 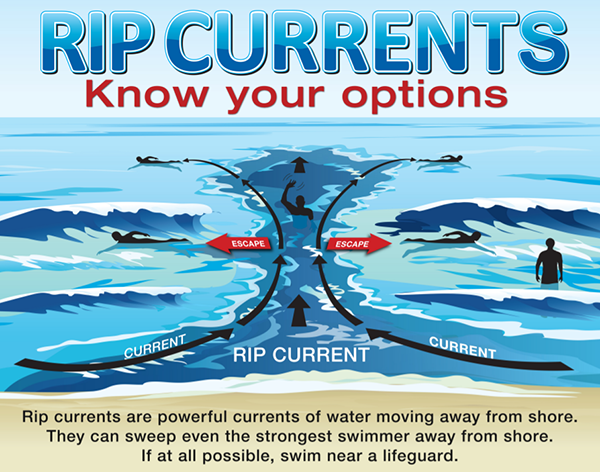 What are Rip Currents?

According to NOAA, the definition of a rip current is “a localized current that flows away from the shoreline toward the ocean, perpendicular or at an acute angle to the shoreline.” Rip currents are typically measured at 1-2 feet per second, but some have reached speeds up to 8-feet per second. This speed is why someone caught in a rip current can be pulled away from the shore suddenly and quickly. Rip currents currently account for over 100 deaths every year and approximately 80% of ocean rescues according to The United States Lifesaving Association. The coast of The Outer Banks is no stranger to these strong currents and ocean conditions can sometimes be very hazardous. Learn more about Rip Currents on the Outer Banks.

Prior to the latest developments in rip current technology, forecasts of rip currents could only be made a couple times a day for a large stretch of coastline, and usually not further out than a day or two in advance. NOAA Senior Scientist Greg Dusek acted as lead developer of the new model and began working with lifeguards around the country, including Kill Devil Hills Ocean Rescue, back in 2011 to obtain years of helpful rip current data. This data, including general observations to rescue statistics, heled scientists study rip current patterns and develop the latest forecasting model. The new model may improve accuracy of predicting rip currents by more than 50% and covers the coasts of Puerto Rico and Guam in addition to the United States.

The model uses a scale of 0 to 100% to predict the chance of dangerous rip currents by the hour in a particular coastal location. Better yet, the model can predict up to 6 days ahead of time. A tool like this could be perfect for both the last-minute beachgoer as well as weekly renters who want to know when and where it might be safer to swim. As technology continues to improve, researches hope to see a decline in rip current fatalities. To learn more, read about the new model in this article from the Outer Banks Voice.