It's funny how history works. The "victors" definitely write the stories offering their side of the events. Sure, in 1492 Columbus sailed the ocean blue, but 10,000 years prior to this, the land he "discovered" was already well inhabited. And this goes for the Outer Banks as well.

When the first English colonists started to wash up on the shores of of the OBX, they were met by friendly, organized, and giving people. Native Americansthat were willing to embrace and help the new arrivals. 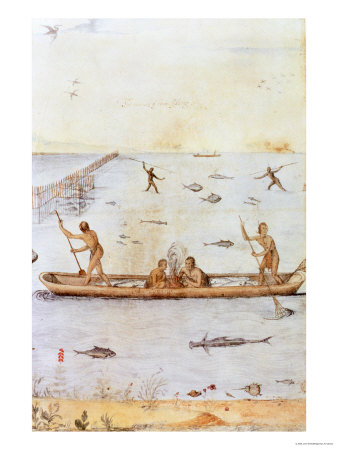 In fact, in 1584 it was estimated that over 17,000 Native Americans lived along the Carolina coast! Wow. With only a loose understanding of American history, we all know the fate that came to most of these Native Americans from coast to coast.

Luckily, some of their history survives and pieces of their story have yet to be forgotten...thanks in large part to places like the  Frisco Native American Museum.

In the 16th century, when Sir Walter Raleigh made three unsuccessful attempts to settle the Roanoke area, he was met by the Algonquians who had settled alarge area between Virginia and Dare County.

The tribes were very well organized and had a well-established way of life. The Algonquians cultivated large fields of corn, grew tobacco (and introducedthe English to tobacco), and gathered on the coast to harvest shellfish - leaving large mounds of shells at their favorite meeting spots (I have one ofthese mounds in my back yard...it's giant!).

The tribes were very accepting of the English arrivals, and it is believed by many that the third failed attempt to settle Roanoke Island - i.e the Lost Colony - may have taken refuge with the Native Americans and become part of their culture on Hatteras Island. 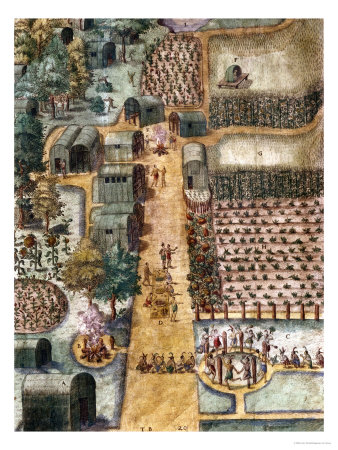 While much of the OBX Native American heritage has slipped away, we need to make every effort to hold on to what is left, and it's nice to have constant reminders of the original OBX locals from names all along the Outer Banks - Hatteras comes from the Algonquian word "Hatorask" that meant "there is less vegetation, "Kinnakeet" meant "that which is mixed;" and "Chicamacomico" meant "place of sinking down sand."

In addition, we have some amazing illustrations from the original English settlers thanks to John White, an illustrator and map maker that was part of thesecond expedition and spent 13 months with the Algonquians.

These amazing illustrations and the limited historical records are all we have left of an amazing part of Outer Banks history.

It is easy to forget, and it's not often talked about, but we owe a huge debt of gratitude the people that came before us. Much love and thanks to theAlgonquians who blazed the trails on the narrow strip of land that we enjoy today.