From surfing and kayaking to hiking and sightseeing, the recreational activities available on the Outer Banks are endless! However, fishing is one of the most fun and relaxing activities that the whole family can enjoy. Between great fishing spots and the wide variety of available species, the OBX draws in thousands of beginner fisherman and professional anglers alike year after year. One species of fish that is particularly abundant in North Carolina’s waters is the Red Drum, and the Outer Banks is the perfect spot to try to catch one. 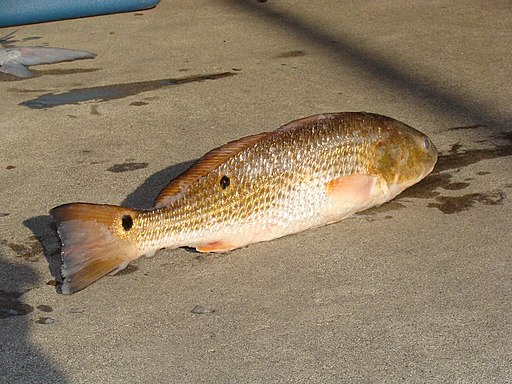 What is a Red Drum?

Even if you aren’t an avid angler, if you’ve ever vacationed on the OBX, you’ve likely heard of a “red drum” before. There’s a restaurant sporting the name in Nags Head (Red Drum Grille & Taphouse), a tackle shop in Buxton (Red Drum Tackle Shop), and you’ve possibly seen drum as a seasonal special on the menu at any local seafood restaurant. (Red Drum are also known as “channel bass,” “redfish,” and “puppy drum.”) 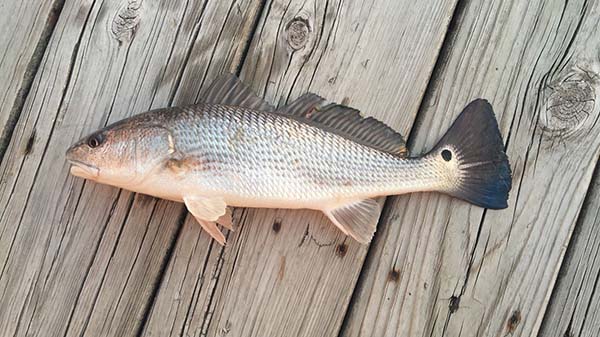 A Red Drum is an Atlantic saltwater game fish that can get rather large, making it a well sought-after catch for recreational fisherman. Due to their mild flavor, they also are a great fish for eating. While they are considered a protected game fish and are subject to recreational size and bag limits, their populations have been growing in recent years. While Red Drum can be found in both the Atlantic and the Gulf of Mexico, North Carolina is a great place to fish for them. In fact, the Red Drum was designated as the official state saltwater fish in 1971 by the NC General Assembly.

Red Drum get their name from the dark reddish color on the top half of their body. Their distinguishing characteristic is a black eyespot near their tail base, and it isn’t uncommon for them to have additional spots. Red Drum feast on everything from crab and shrimp to mullet and croaker. They are related to black drum and usually are found in the same areas. Immature drum are most often found in estuaries with areas of marshy grass while mature drum hang around jetties, bridges, and other manmade structures. Because of this, the Outer Banks is a great spot to fish for Red Drum and they can be found in both the ocean and the sound. 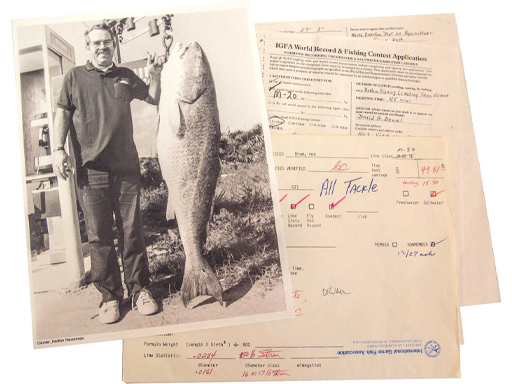 The largest Red Drum ever caught was actually caught in Avon on Hatteras Island in November 1984 by angler David Deuel. The fish weighed 94 pounds and 2 ounces, was 57” long with a 38” inch girth and was both a state and world record. In fact, there are 16 world records for Red Drum with North Carolina holding 10 of them according to the NC Department of Environmental Quality. (Tip: To see the size of the drum for yourself, stop by Frank & Frans Tackle Shop in Avon, NC!)

Another Red Drum related event you may have heard of is the local Red Drum Tournament hosted by the NCBBA (NC Beach Buggy Association) every October on Hatteras Island. Now on its 12th year, the Red Drum Tournament is open to anyone and attracts anglers from all over the country. Participants in the tournament compete for the best catch to win prizes and bragging rights! Frank and Fran’s in Avon acts as the Headquarters for the event but participants are able to fish anywhere from ramp 23 to ramp 38.

Unfortunately, due to COVID-19 Restrictions and the necessity to practice safe social distancing, the 2020 Tournament has been cancelled.

How to Catch a Red Drum on the Outer Banks 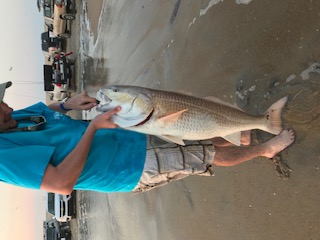 Drum are found in both the Ocean and the Soundside and are more abundant in early spring or fall. Drum may bite on a variety of bait types, but most local tackle shops will recommend mullet or bunker—live bait works best in the sound and cut bait works best in the ocean. The recommended set up is to use a fish finder rig which contains a sinker slide and hook attached to a small leader. Although you can use your preferred rod and reel, it’s recommended to use a line with at least 14-lb test and a medium heavy action rod that is sturdier towards the tip and can hold a little more weight than an average rod. Don’t forget that drum, especially the larger ones, will put up quite a struggle so be patient when reeling in your catch!

If you are new to fishing or have never fished for drum before, simply stop by any local tackle shop on the OBX and ask for help—they will set you up and send you on your way with great tips and advice to catch your first drum.

Note: The bag limits for Red Drum in North Carolina is 1 kept per day per person and they must be between 18” and 27” inches long (as of October 2020). Click here for more information on the recreational size and bag limits.