Perfect for the ultimate family vacation, the Outer Banks of North Carolina is a popular tourist destination well known its expansive undeveloped beaches, great watersport opportunities and awesome fishing locations. However, the OBX is also a wonderful place to visit if you love coastal wildlife. From sea gulls, osprey and pelicans to deer, otters and dolphins, you never know what you might see while taking an evening stroll on the sand or from the comfort of your waterfront deck! But perhaps the most beloved marine animal that frequents the area are the Outer Banks sea turtles. 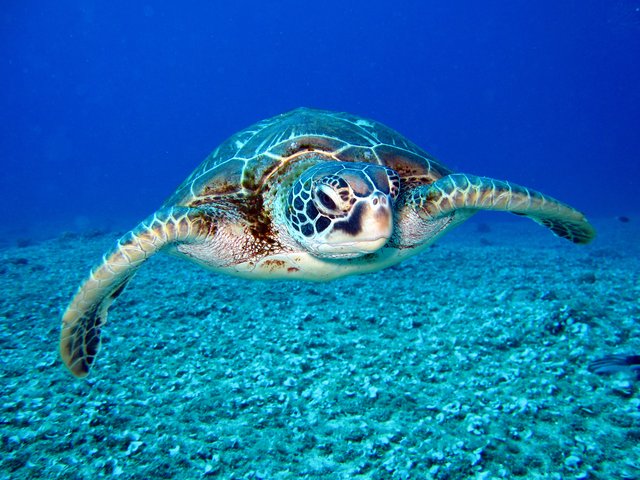 Sea Turtles can be found in each ocean on the planet and are a migratory species who have been around for about 110 million years. There are 5 sea turtle species that come to the Outer Banks: Loggerhead Turtles, Green Turtles, Kemp’s Ridley Turtles, Hawksbill Turtles, and Leatherback Turtles. The other 2 species, not found here, are Flatback Turtles and Olive Ridley Turtles. Despite being ocean creatures, Sea Turtles are air-breathing and must surface for air after a couple hours, especially during periods of high activity. Almost all species of Sea Turtles are omnivores except Green Turtles who are herbivores. The sea turtle diet consists of mollusks, decapods, fish, jellyfish and different marine plants like seaweed and algae.

These cold-blooded reptiles are known to have life spans similar to humans averaging 50 to 100 years while most species take at least 20 years to even mature. Species also range in size with smaller turtles like the Kemp’s Ridley weighing 75-100 pounds and the Hawksbill averaging 100-150 pounds. Leatherbacks are the largest of all sea turtles who can grow up to 9-12 feet long and weigh up to 2,000 pounds. Green Turtles and Loggerhead Turtles weigh somewhere in between at about 200-500 pounds and 200-350 pounds respectively. 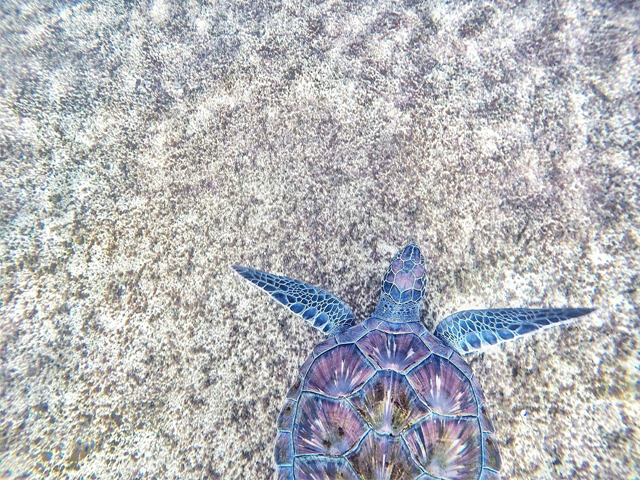 According to the World Wildlife Fund, all 5 species of Sea Turtles found on the Outer Banks are protected under the Endangered Species Act. This act protects them from harassment, capture and harm by law. Violations can result in both civil and criminal charges.

A common danger for all 5 species is commercial fishing, particularly through the use of nets, although they can also get caught on hooks. Sea Turtles need to come to the surface to breathe air, so it isn’t uncommon for turtles to drown once caught in a fishing net. To prevent this, the WWF and other organizations track turtle migration, encourage new technologies that will eliminate net bycatch (like Turtle Exclusion Devices or TEDs), and advocate for protective legislation worldwide.

Green Turtles are considered endangered due to the overharvesting of eggs, being caught in fishing gear, nesting habitat loss, and issues with consuming plastic pollution. They are essential to the marine habitat since they keep seagrass beds healthy by consuming the seagrass. These grass beds function as marine nurseries for several fish species, including common species caught for human consumption.

Loggerhead Turtles are considered vulnerable because they are likely to get trapped in fishing nets and their nesting beaches are threatened by coastal tourism development. They also are known to consume plastic waste, likely confusing it for a jellyfish or algae. Luckily, however, they are less likely to be harvested for their meat or for their shells than other turtle species. Dozens of small plant and animal species are known to live on Loggerhead Turtles so not only do they provide an important habitat for other species, their recycled waste is full of nutrients that keeps ocean sediment balanced.

Kemp’s Ridley Turtles are considered endangered under the Endangered Species Act but critically endangered internationally. They often get captured in fishing equipment but also suffer from a loss of nesting habitats due to coastal tourism development. Kemp’s Ridley turtles are more isolated than other species, found mostly in the Gulf waters occasionally migrating to the Caribbean and Atlantic. Their limited geographic range and unique nesting patterns are very important for scientific research. They also are important to tourism along the southern coast, drawing thousands of visitors who wish to observe them.

Hawksbill Turtles are considered critically endangered and are often harvested for their “tortoise shell” pattern on their shells which is then used to create jewelry and other decorative objects. They are also susceptible to becoming entangled in commercial fishing nets. They are fundamental to the ocean because they help maintain the health of coral reefs and sea grass beds by feeding on sponges, their primary diet, which allows reef fish better access to the reef.

Leatherback Turtles are considered vulnerable but, in some subpopulations, they are considered critically endangered due to overharvesting of eggs, ingesting plastic waste, and susceptibility of getting trapped in fishing nets and hooks since they migrate great distances. Leatherback turtles are fundamental in the marine ecosystem by controlling populations of prey species like jellyfish. Like other species, they also increase coastal tourism. 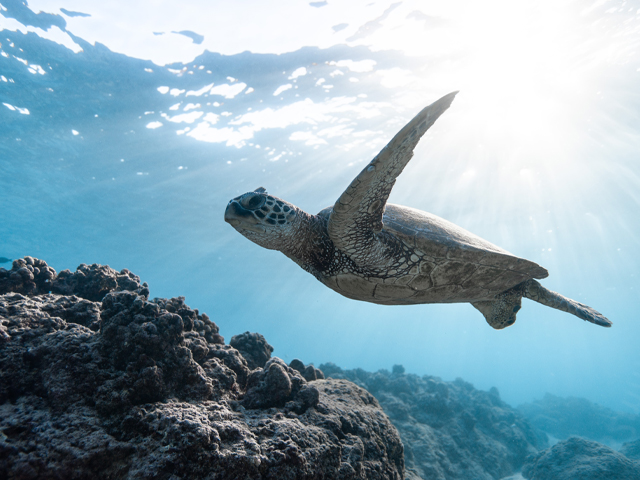 Sea turtles lay groups of eggs called “clutches” that contain anywhere from 50-180 eggs on average. Depending on the species, anywhere from 2 to 8 nests are laid per nesting season, spaced out every couple of weeks. Some species will return to the same nesting beach each season while others may travel to more than one beach. The temperature determines the gender of the turtles—warm sand develops mostly female hatchlings while cooler sand develops mostly males.

Loggerheads and Green turtles are most likely to nest along the Outer Banks, but all 5 species have been documented. Sea turtle nests are vulnerable to bad weather, predators, and humans. When the eggs do hatch, it appears that the hatchlings are literally boiling over out of the sand (hence the name “turtle boil!”) The hatchlings head towards the sea and will spend the next several years in seaweed nurseries. Unfortunately, only a few hatchlings are estimated to survive to maturity at a rate of 1 in 1,000-10,000. 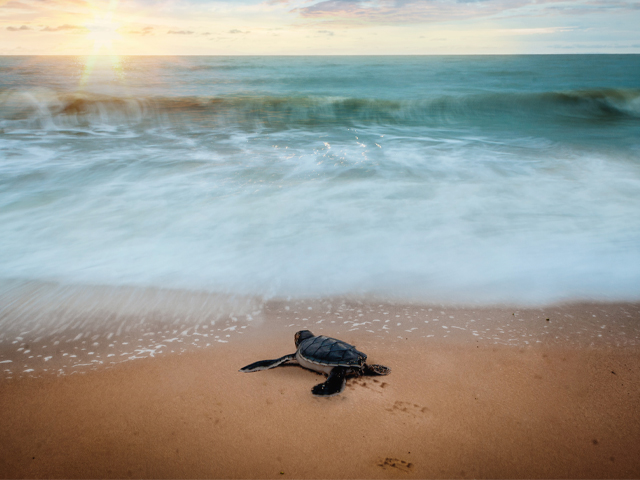 What to Do If You Spot a Sea Turtle

Visitors lucky enough to see a sea turtle in the wild will never forget the experience! However, since they are endangered, it is very important to keep your distance. Visitors should also report any sighting of a sea turtle, no matter their condition, but especially if something appears to be wrong. Along the Northern Outer Banks, call the OBX Stranding Response team at (252) 455-9654 or if you spot one along the Cape Hatteras Seashore, call the CAHA Stranding Response team at (252) 216-6892. Sea turtles often get cold-stunned in the cooler months or may get tangled or trapped in fishing gear or garbage. Nesting turtles and hatchlings can become disoriented or distressed by flash photography, loud noises, pets, or flashlights so it’s important to keep your distance. If you spot a dead turtle, you should also report this so local authorities can study the carcass and learn more about the local population. Under the Endangered Species Act, it is illegal to take any part of the turtle. 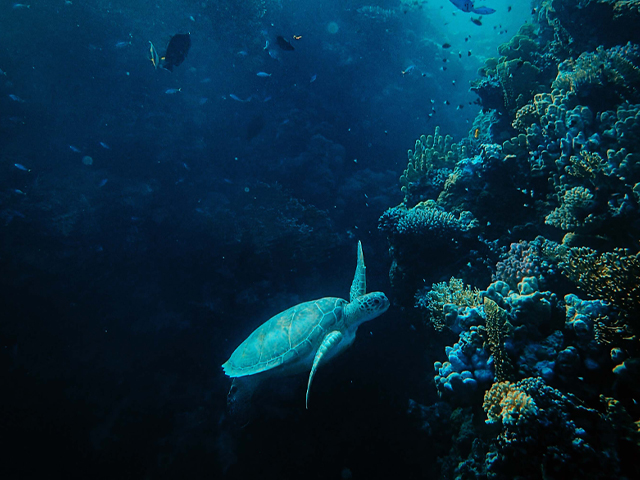 Founded in 1995, the N.E.S.T. (Network for Endangered Sea Turtles) program is a non-profit all-volunteer organization created for the protection and conservation of Sea Turtles along the Outer Banks. Partnering with the North Carolina Wildlife Commission, the North Carolina Aquarium on Roanoke Island, and local authorities, the N.E.S.T. program protects nests, performs ATV beach patrols, educates the community, promotes sea turtle research, and most importantly, works to rescue and rehabilitate injured or stranded sea turtles.

Visitors and locals to the Outer Banks are encouraged to follow the progress of N.E.S.T., volunteer their time, and donate when possible. You can even “adopt a nest” and keep tabs on the newest hatchlings in the area or view rehabilitated sea turtle releases! To learn more about sea turtles, their rescue, and local conservation efforts, visitors can also get a first hand look at these beautiful creatures by visiting the local NC Aquarium on Roanoke Island’s STAR Center (Sea Turtle Assistance & Rehabilitation).

Find out about the NC Aquarium On Roanoke Island's "Sea Turtle Rehabilitation Program" on this episode of the OUTER BANKS PODCAST. 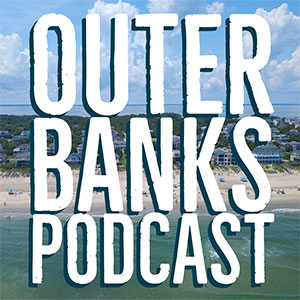