One of the best experiences I have had as an Outer Banks local is being part of the sea turtle watch volunteer team at Pea Island National Wildlife Refuge. It is an opportunity thatlocals can participate in, but few take advantage of.

This past season was a record season in regard to the total number of nests laid on Pea Island. I thought it would be interesting to share my personal experience as a volunteer as well as some information on the lovable, but mysterious, sea turtle and the volunteer program on the OBX. 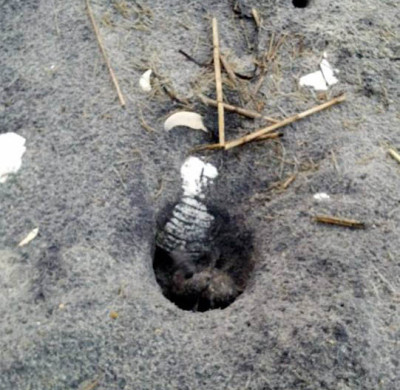 Sea turtles were originally protected under the Endangered Species Act of 1973 and are considered to be one of the oldest surviving species on the planet. Due to pollution, climate change and harvesting, sea turtles numbers have declined since 1939. There are seven species of sea turtles, five of which can be found on the North Carolina beaches.

On Pea Island, starting in May, volunteers travel up and down the 13 mile long stretch of beach in search of turtle crawls which lead to a possible nest.If a nest is verified, the area around the nest receives special attention to alert visitors and staff. Beginning around day 50 after the nest was laid, volunteers begin a nightly vigil and watch over the location until the nest hatches.

If you are lucky enough to see a nest hatch (some people watch nests one night a week for years and never see a hatch), it's an incredible sight! All of a sudden, a small hole the size of your fist opens up in the sand and anywhere from 1 to over 100 baby turtles crawl out.

Even though the hatchlings are newborns, they have a keen sense of where the Atlantic Ocean is, and they are able to navigate to the break without any assistance. The turtle watch volunteers aren't watching the nest to carry the hatchlings to the ocean - in fact, it's beneficial to allow the turtles to stretch their little muscles out as they slowly crawl to the dark ocean water.

Turtle watch volunteers are mostly needed for two things, they are there to keep track of which nests hatch and how many turtles crawl out, and they arethere to fight off any predators such as ghost crabs or birds. Once the tiny, infant sea turtles finally make it to the water, they begin their trek to the Gulf Stream - some 10 plus miles away from the shore. 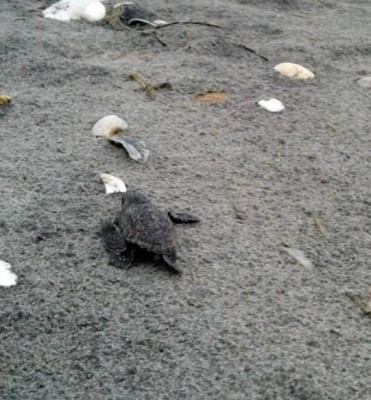 Although these reptiles are highly protected onshore, once they make it to the water, they are on their own. Even though great measures and effort go into assisting the hatchlings, only one in approximately 2000 hatchlings will survive until adulthood.

I was lucky enough to watch one of the green turtle nests hatch (along with a couple loggerhead nests) and it was remarkable to see the difference in sizeand speed between the green and loggerhead turtle hatchlings. In fact, the greens moved almost twice as fast to the water compared to the loggerhead, and their coloring was quite distinct.

Although I experienced my fair share of rain, lightning, dark nights, wind and sand, it was well worth the time to participate in the turtle watch programon Pea Island. The nights with clear skies, warm weather and baby sea turtles certainly made it all worth our effort!

If you are an Outer Banks local or plan on spending more than a few weeks in the area between May through November, there are volunteer opportunities with the local Fish and Wildlife National Wildlife Refuges available.