Shipwreck found in Corolla could be from the 1600s

The Outer Banks of North Carolina, the Graveyard of the Atlantic.  There have been thousands of  historical shipwrecks discovered up and down the Outer Banks coast. Now there is confirmation of yet another one.

A Corolla homeowner discovered and reported the possibility of a wreck in 2008.  Not thinking much of it, officials administered no investigation. After costal storms churned up a lot more of the wreck in 2009, and people started finding coins from the early 1600's washing up on the beach, investigators began the process of recovering,  identifying, and trying to determine the origins of the ship. 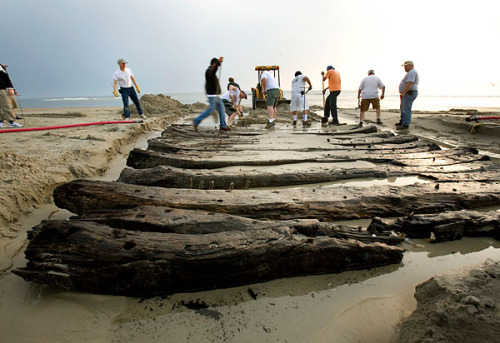 Fast forward to today.  Marine archaeologist Dan Brown claims to have the answer.  Brown believes that the wreck is a 28 gun British naval vessel named the "HMS John" which went down in 1652.

The ship, the oldest shipwreck ever found on the OBX coast,  is currently sitting on a concrete pad behind the Graveyard of the Atlantic Museum.  Although shipwrecks have been turning up for centuries on Outer Banks beaches, it still blows our mind to think that something from the 1600's is just hanging out down on Hatteras Island.