Merriam-Webster defines a landmark as “a conspicuous object on land that marks a locality,” and “a structure (such as a building) of unusual historical and usually aesthetic interest, especially one that is officially designated and set aside for preservation.” The Outer Banks has dozens of those. Landmarks in the Outer Banks are great places to visit if you need fun family-friendly activities or you’re looking to learn a little more about the history of these barrier islands. From museums and historic sites to bridges and piers, we’ve compiled a list of the Top 12 Outer Banks Landmarks to add to your vacation itinerary.

For those visitors coming in from the north, one of the most recognizable landmarks (and a key point in the journey signifying you’re ALMOST there!) is the Grave Digger monster truck. Digger’s Dungeon features the iconic truck propped up right along the highway so you can’t miss it. The site also features Digger’s Diner, a shop with plenty of Grave Digger merchandise, and the opportunity to ride over a bumpy dirt track in a real monster truck. Kids of all ages will love the opportunity to experience such a fun adventure! The Whalehead Club in Historic Corolla is a 21,000 sq.ft. mansion that sits on 39 acres along the Currituck Sound. Originally opened as a hunting retreat in 1925 by owners Edward and Marie Knight, the Whalehead Club is known for its Art Nouveau-style architecture. After the Knights’ deaths, the building was sold and used for a variety of purposes including a Coast Guard shelter, correctional school for boys and a government rocket fuel testing location before ending up abandoned for two decades. Restored to original condition in the 90’s, the iconic yellow manor and surrounding grounds are open for tours allowing visitors to step back in time to another era of local Outer Banks culture. The Wright Brother’s National Memorial is a 60-foot tall monument that sits upon a hill overlooking the town of Kill Devil Hills. This structure, made of over 3,000 tons of granite, sand and gravel, was opened in November 1932 to honor brothers Wilbur and Orville Wright who were the first people to fly a heavier-than-air powered aircraft. This flight occurred on December 17, 1903, lasted 59 seconds and flew a distance of 852 feet. Today, visitors will love exploring the 428-acre park, seeing reproductions of the Wright Flyer I and discovering the history of flight at the museum. Read more about experiencing the Wright Brothers Memorial. 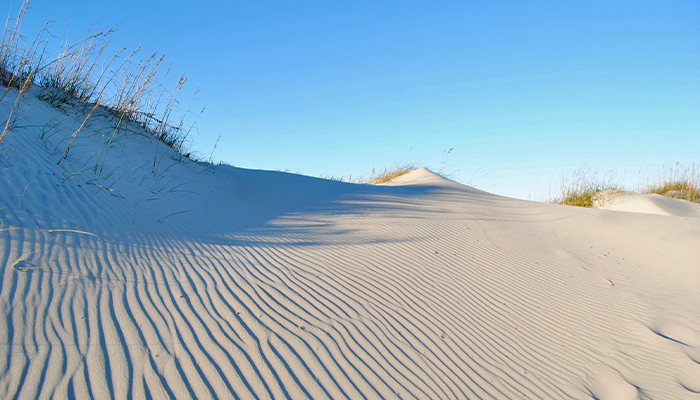 While most of the other landmarks on our list are man-made structures, Jockey’s Ridge is a natural, living landmark and happens to be the tallest of its kind on the East Coast. With the shifting winds, Jockey’s Ridge can grow as tall as 60 feet. Formed over 3,000 years ago, it originally was an important landmark to natives in the area and to the Europeans who settled here. Today, the dune acts as a landmark to visitors and locals alike to signify a unique natural piece of history where you can enjoy kite-flying, hang gliding, hiking, and 360-degree views of The Outer Banks and its surrounding waters. A beloved location by anglers and sightseers alike, Jennette’s Pier is known for its wonderful fishing and gorgeous ocean views. Whether you’re trying to reel in a big one or just want to observe the ocean life beneath you, Jennette’s Pier is the perfect location for your family to visit. Opened in 1939, the original pier was 754 feet long with pilings driven about 65 feet into the seabed. As with most piers on the East Coast, years of hurricanes, nor’easters and other storms led to numerous repairs throughout the years. Eventually, the pier was purchased by the North Carolina Aquarium Society but in 2003, Hurricane Isabel sadly destroyed over 500 feet of the pier. The new pier, opened in 2011, the new pier is 1,000 feet long, made of concrete, and features an educational visitor center that both kids and adults will enjoy. Built “in memory of the valiant men and women who founded the first English Colony in America,” The Elizabethan Gardens were first opened on August 1960 and were designed as an Elizabethan-era style luxury garden around the many historic artifacts and other garden statuary found on site. From iron gates that used to hang in the French Embassy in Washington to a marble statue of Virginia Dare that was recovered from the bottom of the ocean after a shipwreck to an early 16th century Jacobean table and an oil portrait of Queen Elizabeth I from 1592, the Elizabethan Gardens are a living museum that are spectacular any month of the year. Visitors will love winding through the unique garden while admiring the vibrant vegetation framing each path. The Fort Raleigh National Historic Site has been an important location for different events throughout history. From Roanoke Island’s earliest inhabitants and the mysterious disappearance of the first English settlement (known as the Mystery of the Lost Colony) to the Freedman Colony established during the Civil War and the radio transmission experiments conducted in the early 1900s, visitors will feel truly connected to our nation’s past as they tour the 355+ acre park ground including various monuments, trails, and visitor’s center. The adjacent Waterside Theater is the location of the annual Lost Colony performance. The North Carolina Aquarium on Roanoke Island is a 68,000 sq. ft. aquarium complex that allows visitors to learn about the ecosystems of the waters around eastern North Carolina, explore the Atlantic Ocean and all its inhabitants, and discover the importance of coastal conservation. From sharks and alligators to turtles and stingrays, kids of all ages will love learning about the local marine wildlife. With interactive exhibits, state-of-the-art tanks, a soundside pier, café and a plethora of educational programs and activities with a focus on marine conservation, there is plenty to experience year after year. To take a virtual walk-through of the aquarium, check out the video below and read our blog: Experience the NC Aquarium on Roanoke Island. The iconic Herbert C. Bonner Bridge definitely deserves a place on this list. First opened in 1963, the bridge allowed for easy travel between the northern Outer Banks and Hatteras Island while increasing local tourism. The bridge, which was only built to last 30 years, hosts thousands of travelers per day during the prime months and has been increasingly deteriorating over the years due to the unforgiving environmental conditions of the area, even earning a safety sufficiency rating of only 2 out of 100 in a 2007 study. Although plans for replacing the bridge began almost three decades ago, a replacement finally came to fruition when construction for a new bridge started in March 2016. Despite the potential dangers, controversial lawsuits, and weather-related shutdowns, the Bonner Bridge had long been a symbol that a beach lover’s long-awaited summer vacation has arrived.

Update: The new bridge officially opened to traffic in February 2019 and was named after former NC Senator and Dare Co. native Marc Basnight. The new bridge spans 2.8 miles long and was built parallel to the former structure, which is in the process of being removed. For more information, read our blog about the Bonner Bridge Replacement Project.

The Chicamacomico (“chi-ka-ma-COM-i-co“), Life-Saving Station was built in 1874 and was one of many stations funded by the government as a response to the frequent shipwrecks in the seas along the coast (known as the Diamond Shoals). The most famous rescue for this station, and one of the most impressive in maritime history was the rescue attempt of the SS Mirlo in 1918 which was struck down by a German U-boat during WWI. Keeper John Allen Midgett and his crew took surfboat No. 1046 out into the fiery waters surrounding the wreck to search for survivors and successfully rescued 42 British sailors. Although these stations were once operated by the U.S. Lifesaving Service division, coastal life-saving services were taken over by the United States Coast Guard when it was created in 1915. Today, the Chicamacomico site honors the bravery of these heroic lifesavers and gives visitors the chance to learn about the history of maritime rescue while exploring original buildings and a museum featuring replicas, equipment and other artifacts.

11. Graveyard of the Atlantic Museum

Between treacherous storms, volatile currents and strong waves caused by the shifting sandbars, the waters around the Outer Banks have become the final resting place of thousands of ships and their crew throughout history. This dangerous area of water, known as The Diamond Shoals, earned the nickname “Graveyard of the Atlantic” due to these abundant and horrible losses. Located on the southern tip of Hatteras Island, the Graveyard of the Atlantic Museum lets visitors discover maritime history through its artifacts and exhibits. From diving, fishing and life-saving to naval warfare, piracy, and shipwrecks, the museum explores the evolution of oceanic technology and seafaring culture. Notable artifacts include the original 1854 First Order Lens from the Cape Hatteras Lighthouse and artifacts from Blackbeard’s Queen Anne’s Revenge.

A small plot of land on the southern island of Ocracoke is home to a memorial for the British sailors who lost their lives on the HMT Bedfordshire in 1942 during the Second World War. During WWI and WWII, the Atlantic surrounding the area was known as “Torpedo Alley” – a dangerous stretch of waters infamous for being the final resting place of over 350 ships due to attacks from German U-boats. When the HMT Bedfordshire was struck, there were no survivors and the local families who lived on Ocracoke Island at the time decided to create a proper burial ground for the four sailors whose bodies did wash ashore. Maintained by the Ocracoke Coast Guard, a ceremony is held each year in May to honor those who served and is attended by members of the British Royal Navy and the U.S. Coast Guard.