Have you ever seen this on the beach during your vacation?

If you've ever visited North Carolina's Outer Banks then you most likely have ventured across one of these washed up on the beach. What is it? Some sort of evil shrunken crab? An alien pod from outer space?  Could it be sea monster dookie (gross)? 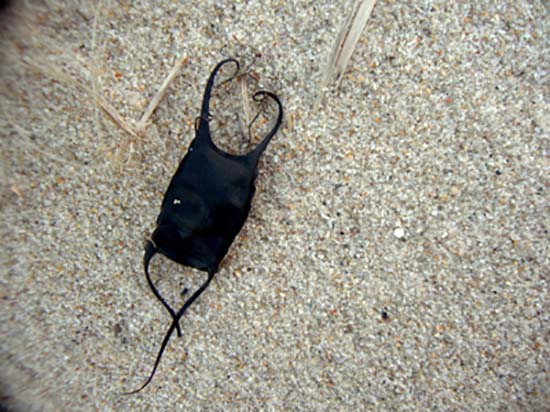 So what's the Answer?

The answer of course is none of the above.  What you're seeing is actually a Skate egg shell.  Okay, well what is a skate?

This is a Skate 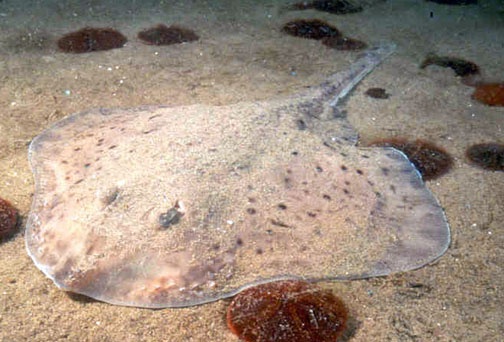 A Skate is a flat, boneless fish belonging to the Rajidae family. They have pectoral fins that look like wings on the sides of their body and a distinct dorsal fin that is divided into two lobes on a thin tail. Skates might remind you of a Stingray because they do resemble the Stingray and are bottom feeders with gills on their underside. Unlike rays who give live birth, however, skates lay eggs. They are often brown or gray in color with eyes on the top of their body. While they prefer deeper water, they may come closer to shore and are often caught by local fisherman.

The Skate egg shell, or case, is usually 3-4" long. The pouch is made of keratin, the same stuff that your nails are made of, and has little horn-like projections protruding from each corner. These horns latch onto objects, such as seaweed, and anchor the egg shell to the ocean floor. When the baby Skate is ready to leave, the shell splits open at one end and the Skate skates on out (yes we went there). The empty shells then wash up on the beach where humans give them all kinds of crazy nicknames such as "mermaid's purse," "sailor's purse," or "devil's pocketbook."

So the next time you are on an Outer Banks beach and see a little black burnt marshmallow looking object, impress your friends by telling them it is a Skate case. Hopefully they will respond by saying, "Wow, look at the big brains on you!"  This will make you smile.

About the Author: A former radio DJ from Nashville, Chad has been fully embracing the island life for about 10 years. Whether he's hiking through Nags Head Woods or hang gliding off Jockey's Ridge, he loves experiencing everything the Outer Banks has to offer. In his spare time, you can find Chad hanging out with his wife and 2 daughters, filming/editing really awesome videos, and moonlighting as Captain Seaside.