Fishing is a favorite pastime for many visitors to the Outer Banks because the 100+ miles of coastal shoreline is a fisherman’s paradise! Whether you walk out to the end of your favorite pier, cast a line right off the beach, wade out in the sound, or take a boat offshore… you never know what you will reel in from the local waters. Recently, one OBX visitor learned this when he and his son had the catch-of-their-lifetime.

On February 24, angler Josiah VanFleet from Virginia, along with his 9-year old son and a few friends were fishing about 45-miles off the coast of Nags Head when they hooked into something most of us could only dream about seeing up close—a huge bluefin tuna.

The Atlantic bluefin tuna is a big-game species native to the Atlantic Ocean and Mediterranean Sea. They are known to weigh up to 1,500 pounds although most of the ones caught commercially are half that size. In North Carolina, bluefin tuna are considered a Highly Migratory Species (similar to other tunas, billfish/marlin, and swordfish) with very specific bag and size limits. Bluefin tuna is a coveted food fish commonly used in raw dishes like sushi. It can also be used for sashimi, tartare, or seared as a steak. 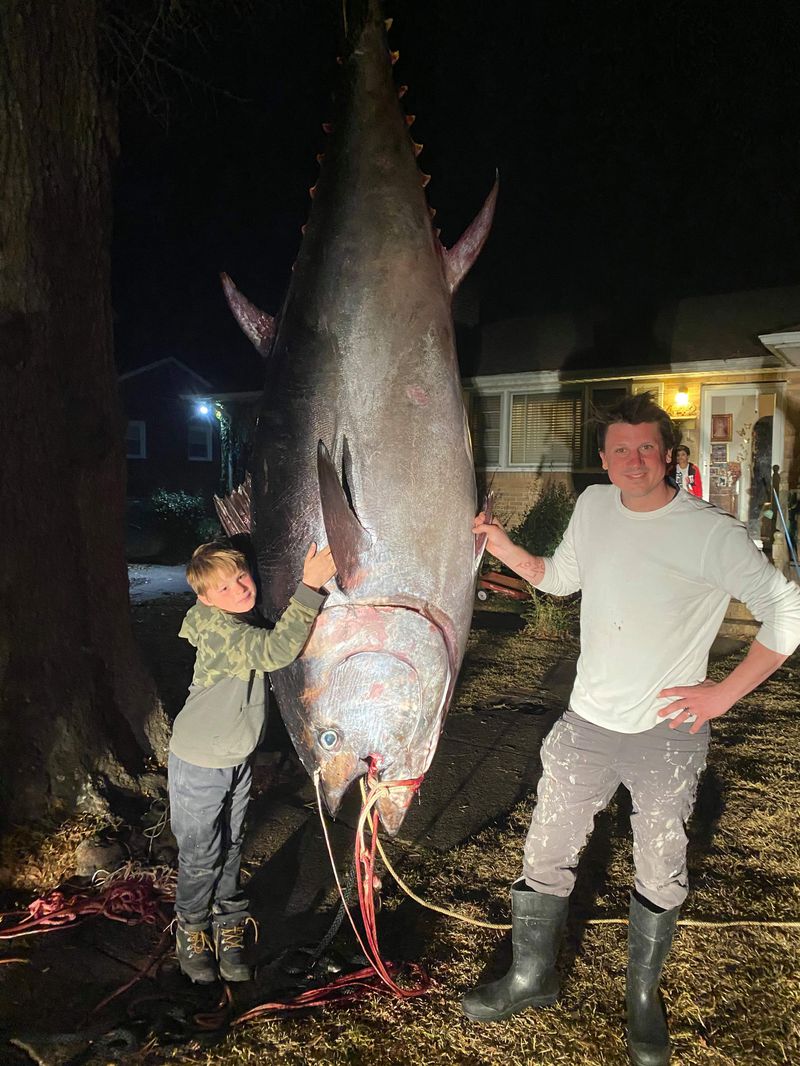 Once VanFleet and his crew hooked the fish around 8:15 AM, getting it reeled in was no easy task. In fact, they documented the whole ordeal on video which will give you just a small idea of the arduous process of reeling in something that size! According to VanFleet, it took over 2 hours and four crew members aboard their 22-foot Grady White boat to reel the giant tuna in close enough to harpoon it. At one point, the reel even required a quick fix leaving the fisherman with no other choice than to momentarily hold the line by hand. One the crew got the tuna to the boat, it took another 2 hours to figure out how to get it on board and tow it back to shore.

When the crew finally returned to Oregon Inlet, the US Coast Guard helped measure the fish which was estimated to be about 9 ½-feet (114.5-inches) long with a girth of 83-inches around its belly. It weighed in around a whopping 1,000 pounds. While an estimated measurement doesn’t qualify for a world record, the largest bluefin tuna currently on record for being caught off the North Carolina Coast was caught in 2017 and weighed in at 877 pounds. According to the International Game Fish Association, the largest recorded bluefin tuna was caught off the coast of Nova Scotia in 1979 that weighed in at 1,496 pounds!

VanFleet’s son pretty much sums up the whole experience in the video when he excitedly proclaims, “This thing is absolutely ginormous! Oh my gosh. This is the biggest fish I’ve ever seen!” If you’re wondering what the crew did with the fish afterwards? Enjoying it, of course! All in all, it took 200 pounds of ice to transport the fish back home where it was split among those on board. Congratulations on a great catch! Read more in this article from The Virginia Pilot.

Don’t forget—when you book a home with Seaside Vacations, you automatically are eligible for discounts to local activities through our Club Seaside Program. If you’re interested in inshore or offshore fishing charters to have your own awesome fishing experience, try booking a charter through one of our fishing partners: Fishin' Fannatic Charters, Rock Solid Fishing Charters, and Wanchese Marina Fishing Charters. Who knows what you might catch?!

Learn More About Fishing on the Outer Banks