Whether you come to the Outer Banks to eat all the seafood you can get your hands on, visit local attractions, or simply get away from it all, part of what makes this place so appealing is that it's made up of several islands that each offer their own appeal and unique history. To the East of mainland North Carolina (across the Croatan Sound) and to the West of Nags Head (across the Roanoke Sound) sits one such island with no shortage of small-town coastal charm that is deeply rooted in American history, drawing thousands of visitors year after year. Made up of the towns of Manteo and Wanchese, Historic Roanoke Island is one destination you won’t want to miss.

Size: Roanoke Island is about 8 miles long and only 2 miles wide.

Location: Unlike the other parts of the Outer Banks, Roanoke Island does not share its borders with the Atlantic Ocean but is instead entirely situated within sound waters. Connected to US Highway 64, it provides the west entrance and exit to the rest of the Outer Banks and acts as a hurricane evacuation route. Taking 64 East over the Virginia Dare Memorial Bridge will take visitors from the mainland to the island and continuing on a series of smaller bridges (the Washington Baum Bridge and Melvin R. Daniels Bridge) will put travelers in Nags Head.

Terrain: Roanoke Island has a slightly different terrain than many of the outer barrier islands. It’s made up of marshland, sound beaches, and pine tree forests. 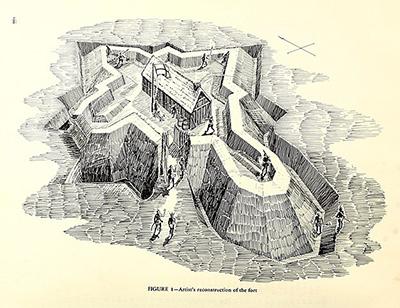 Roanoke Island is most known for being the destination of a series of trial settlements in the late 1500s funded by Sir Walter Raleigh by order of Queen Elizabeth I of England. The first expedition in 1584 was simply a scouting voyage to become familiar with the area to find a good location for a settlement. The sailors returned to England with local tribal leaders, Wanchese and Manteo, in order to report their positive findings on the land conditions. This led to a second trip, or first settlement attempt, in 1585. The voyage from England back to Roanoke Island consisted of roughly 600 sailors and the two Algonquian leaders in tow. A series of delays, weather complications, and disagreements between the fleet commander, Sir Richard Grenville, and appointed governor of the new colony, Ralph Lane, ultimately destroyed any hopes of a successful settlement. After one of the cargo ships carrying supplies was damaged, the team split with most returning home to England. A group of about 100 settlers stayed with the governor and a small community was built.

Unfortunately, relations which had once been positive, began to deteriorate between the settlers and local Algonquian tribes. The settlers were heavily dependent on the tribe for survival, unable to sustain themselves off the land and their existing supplies. At the same time, English disease raced through the native population. To seal an already complicated relationship, the leader of the Secotan (Carolina Algonquian) tribe was killed before he could carry out an alleged plot to wipe out the settlers. Eventually, a fleet led by Sir Francis Drake arrived along the Outer Banks coast in June 1586 and Drake agreed to help Lane find a better location for the settlement. Before further scouting could continue, however, an Atlantic hurricane forced the entire colony to return to England.

By 1587, one more attempt would be made by the English to settle on Roanoke Island. This go around, 116 men, women, and children arrived at Roanoke Island to establish a permanent English settlement. John White was appointed governor of this establishment and among the settlers was his daughter, Eleanor Dare, and son in law, Ananias Dare. They gave birth to their daughter, Virginia, who is recognized as being the first-born English citizen on American soil. Shortly after, Governor White sailed back to England with the promise to return with more provisions for the settlement. Sadly, war and other financial delays prevented White from sailing back to Roanoke for three years. 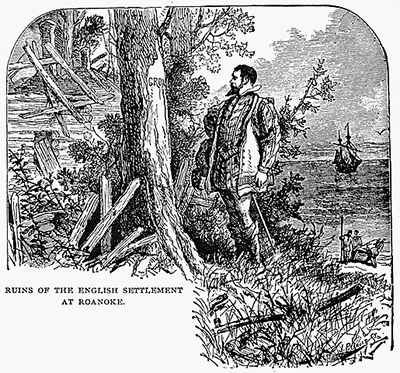 When he was finally able to return, White arrived on location to find that the settlement had been completed deserted with no trace of the colonists. His only clues were the words “CROATOAN” carved into a palisade at the site and the letters “CRO” carved into a tree leading him to believe that the settlers had possibly moved to the location of the nearby Croatoan tribe. Despite plans to search for his family and the other settlers, another hurricane caused him to return to England and he was never able to raise the funds or resources to return to Roanoke ever again.

Although the area was eventually settled and grew into a fishing and farming community, the fate of those original colonists still remains a great mystery today. Some of the theories and folklore to explain the disappearance include hurricanes, starvation, war with the natives, and relocation. Many believe that the colonists simply assimilated with nearby tribes in order to survive. With little historical evidence to support any of these theories, researches, genealogists, historians and archeologists are still searching for answers. This failed settlement is infamously known as “The Lost Colony.” 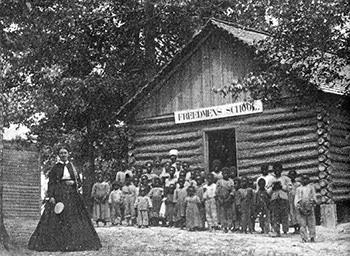 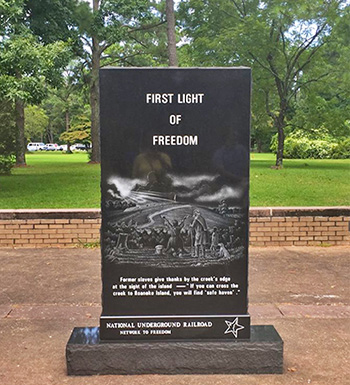 By 1863, Roanoke Island also became home to several escaped African Americans from mainland North Carolina. After they were freed by decree of the Emancipation Proclamation, a community was built on the island, now known as Freedmen’s Colony. Churches, schools, workplaces and homes were built for the newly freed slaves with the hopes that a successful community could emerge. Although the colony mostly thrived throughout the duration of the war, and reached a population of over 3,000, Union-occupied land was returned to the original owners after the war ended leaving the majority of the community without land rights and forcing them to relocate. By 1867, the colony was officially decommissioned although a small population of about 60 households remained on the island, according to an 1870 census report. To commemorate the colony, a marble monument was established on the Fort Raleigh National Historic Site in 2001 and the site is considered part of the National Underground Railroad Network. The First Light of Freedom monument reads, “If you can cross the creek to Roanoke Island, you will find ‘safe haven’.”

This year, Seaside Vacations added three new vacation rentals on Roanoke Island for our guests to enjoy! Located just half a mile from Manteo Waterfront, a short 10-minute walk will let you explore the local shops and restaurants without the hassle of finding a parking space. Sites like Island Farm, the Elizabethan Gardens and the NC Aquarium on Roanoke Island are less than an 8-minute drive away making it easy to tour the island's historic sites right from your rental. When you are ready to hit the beach, the E. Gulfstream St., Jennette’s Pier, and Gray Eagle St. beach accesses with public parking are also only a short drive away (roughly 10-12 minutes). From the convenient location of these rentals, you can also head north to experience the main Outer Banks areas from Nags Head to Corolla, or you can hop on the new Marc Basnight Bridge and head south for a daytrip to Hatteras Island and Ocracoke Island.