Ever actually watched a boat unload its catch of the day? It is actually pretty neat to see what everyone is talking about when they say how great Outer Banks fishing is. We went out to Oregon Inlet Fishing Center to include it as an Outer Banks Treasure and was lucky enough to get them unloading an awesome catch of dolphin and tuna.

I never actually realized how much of a city girl I was until the day I went to get this video. Before I headed to Oregon Inlet I had to make that always dreaded trip to the DMV to get my car registered. When I get to Manteo I ask where the License Plate office is and they tell me its at a pharmacy...? Being from Charlotte, NC where there is a DMV building on every corner with a line out the door I was completely in awe that they would have a DMV in a pharmacy with 2 people in line! I was in and out in about 15 minutes. 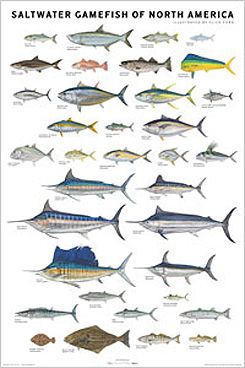 I had been to Oregon Inlet Fishing Center before but never in the summer. I was surprised to see how many people were there and was so excited to see a boat bring in its catch, since I had never seen it in action. As I was walking around I found myself feeling particular about what catches I wanted to film. Kind of funny huh? Well someone was unloading a boat of blue fish and I thought...eh not big enough :) I'm getting too spoiled with the whole fishing thing! Anyway I saw the Outrigger of Nags Head coming in and thought I would see what they were going to unload.

Like I said its weird that I am so spoiled because as they were unloading the boat I had to ask my boyfriend (the fishing guru) what kind of fish they were bringing out. I had never seen dolphin or tuna before so it was awesome to finally see what they looked like. Pretty big too! I would have to say that since living in the Outer Banks I have definitely grown to enjoy fishing especially in salt water. Ive decided I have to throw my girly-girl status out the window if I'm ever going to fit in around here. 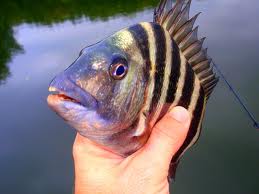 After we visited the fishing center we went down to the Bonner Bridge which was another treasure in itself. Whether it is for fishing or laying out on the beach it is truly a beautiful place with views of the Bodie Island Lighthouse which is pretty neat. The fishing turned out to be amazing on Friday. We usually climb down on the pileands because if you fish from the bridge, with the current sometimes it is hard to feel when you have a bite. I wouldn't recommend this unless you are with someone who knows what they are doing though, because it could be dangerous. We ended up catching about 70 lbs worth of sheepshead (a type of fish), which is really rare and supposedly a delicacy to eat! They are also pretty funny looking and have teeth similar to a humans.

Between the fishing center and the areas around it for fishing, Oregon Inlet is surely a treasure and offers lots of fun for the whole family. The boys can take off to the bridge while you watch from your beach chair with your toes in the sand, or head to the fishing center to see the catches of the day or check out the state record fish displayed. A real treasure is unexpected and unique. For me the fun in fishing was definitely unexpected and is promised to be the same for you! Make sure if you are in the area you check it out and if you need any tips or have questions make sure you let us know. Enjoy.