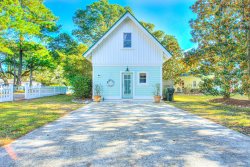 What makes the Outer Banks so great is that not only do we have family-friendly beaches (the top in the country in fact according to Dr. Beach), but as a whole, the Outer Banks is a great place to have a vacation. Whether you're a foodie, an adventurer, a history buff or an avid beachcomber, the Outer Banks has something for everyone and that is why it is consistently named best of the best. With so many things to see and do on top of having 100+ miles of pristine coastline to explore, it's no wonder that the Outer Banks has racked up dozens of accolades over the years.

Although the well-known “Dr. Beach” and his “Top 10 Beaches in America” list has become a very well known and highly anticipated list over the last few years, Dr. Beach has actually been rating the best beaches in America since 1991. Up until 2001, the list was actually released as a "Top 20" list but was eventually narrowed down to the just the top ten destinations. Whether or not you agree with Dr. Beach’s criteria and ranking strategy, one thing is for certain – Dr. Beach is a big fan of the Outer Banks. In fact, the Outer Banks has made the top 10 list every year since 1999 and before that, was still ranked somewhere between #11-20 when the list was a bit longer.

Since 1999, Dr. Beach has chosen either “Ocracoke” or “Cape Hatteras” as a top beach in the United States. For the first time since there were 20 spots on his list, 2018 marked the inclusion of TWO different OBX beaches on the list. For 2018, “Ocracoke Lifeguarded Beach” and “Lighthouse Beach in Buxton” both made the top 10 list as #2 and #6 respectively. For 2019, Ocracoke Lifeguarded Beach made the cut again at the number 2 spot. To determine his rating, Dr. Beach examines 50 criteria points of specific coastal conditions that he feels make a particular spot of sand good for families. These categories include lifeguard availability, safety record, noise, pests, rip currents, water algae, public safety, garbage in the water, wind speed and wave size just to name a few. So essentially, out of every single beach in the country, areas in the Outer Banks continue to get marks high enough to make the top 10 list.

Take a look at where the Outer Banks has ranked on Dr. Beach’s list over the few years:

It isn’t just the Top 10 List by Dr. Beach where the Outer Banks has been recognized. The US News & World Report Travel Rankings is an extremely handy website for finding great vacation destinations. Unlike Dr. Beach who looks exclusively at beaches in the US and rates them based on particular categories, the travel rankings with US News & World Report are determined based on a combination of “expert” opinion and reader opinion. Despite being updated on a continuously rolling basis (per their vacation ranking methodology information page), the Outer Banks currently remains in a top spot in several categories:

Since the Outer Banks became a popular tourist destination for friends and families, it has won a string of accolades and continues to be recognized as one of the best beach destinations in the country. From news sites like Forbes and USA Today to well-known travel publications like Travel Channel and Our State Magazine, it seems that the Outer Banks is named “best of” in some category every year. Here are just a few of the categories over the last 5 years in which the Outer Banks has topped the charts: