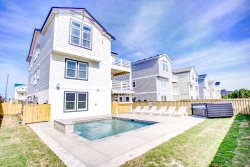 If you've vacationed on the Outer Banks before, then you may have heard of or seen the word Croatan. Torefresh your memory, our major five lane highway that stretches from Kitty Hawk to Nags Head uses the word (Croatan Hwy 158) and so does the major body ofwater that separates Roanoke Island from the mainland (Croatan Sound).

Have you ever wondered what the origin of the word is or have you ever wanted to learn more about the rich history behind it?

To begin our story about the origin of the word, we have to venture way back to the 16th century and describe the small, Native Americangroup known as the Croatan tribe.

The tribe resided in present day Dare Country - which encompasses Alligator River, Croatan Sound, Roanoke Island and parts of the OBX including Hatteras Island. Hatteras Island was previously known as Croatoan Island and is where amajority of the tribe is believed to have lived.

The Croatan tribe is closely linked to the first British colonists of Roanoke Island who later became known as the "Lost Colony." Prior to settling onRoanoke Island, the colonists had settled on Croatoan Island (Hatteras Island) in 1584 and a few of them had been living there for several years before agroup moved to Roanoke Island.

When John White returned from his fifth voyage to England, he found that the colony of the first English settlement in the New World was abandoned. Theonly clue to the colonists' whereabouts was the word C-R-O-A-T-O-A-N found carved on a post at the settler's fort on Roanoke Island. It is logical tobelieve that the colonists left Roanoke Island and had gone to live on Croatan Island, a place they had already lived before. It was also well-known thatthe settlers had built up a strong relationship with the Croatoan natives.

John White, who developed maps showing both Croatoan and Roanoke, wrote the following in 1590:

"I greatly joyed that I had safely found a certain token of their safe being at Croatoan, which is the place where Manteo was born, and the savages ofthe island our friends."

The Croatan people suffered from epidemics from diseases such as smallpox in 1698 and the tribe was believed to be extinct by the early seventieth-century.

Descendants of the Croatoan tribe are the modern day Lumbee and they began to appear some 50 years after the disappearance of the lost colony. People havedescribed these people as having European features and speaking English. The state of North Carolina recognizes the Lumbee as true descendants of theCroatoan.

Croatoan has been found in several other mysterious places.

The word has also been incorporated into an English expression "back to Croatoa" meaning to live in a primitive fashion.

Thanks for reading and if you want to learn more about the rich history of the OBX, be sure to check out our Outer Banks history section on our blog! :)